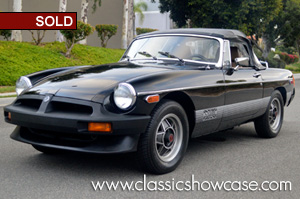 (SOLD) This excellent, stock MG B Limited Edition Roadster benefits from low original miles, and a number of attractive and desirable options specific to these cars. A total of 6,668 Limited Edition MG B models all finished in Black were produced from 1979-80, further enhancing its already great collect-ability in becoming a true British classic. This example was produced during the end of its production run, and is full of unique options including: Limited Edition Silver body stripes, Special 5-spoke alloy wheels, air dam, boot and toneau covers, books, chrome luggage rack, leather padded 3-spoke steering wheel, Limited Edition dash plaque, and Limited Edition threshold. The MG B is powered by a 1798cc, 4 cylinder engine with 4-speed transmission, and is a very roomy 2 seater sports car that makes a great choice for taller drivers requiring additional legroom. It has recently finished a cosmetic restoration and full vehicle servicing by professionals at Classic Showcase, and is now ready for your driving pleasure. This MG B is a rare example that has been very well kept and maintained, is highly original, and presents a great opportunity for the new British classic collector.