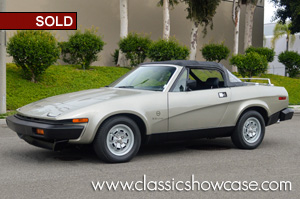 (SOLD) This sporty Triumph TR-8 roadster is a very original car with documented limited ownership, and in great condition. This example has benefitted from being meticulously maintained, and was produced during the end of British Leyland’s production run of Triumphs. Powered by a muscular V8 engine that is cast of lightweight aluminum alloy, the TR-8 shows impressive power and strength, and consistently out powered, outperformed, and out handled the competition in numerous American road races and rallies at the time of production. Recently, the TR-8 has completed a comprehensive servicing by professionals at Classic Showcase, and the roadster features a number of desirable options including: Factory A/C (that will require service), full Smiths instrumentation, Blue bucket seats with plaid inserts, Trunk rack, factory wheels, and an enhanced exhaust system. The car comes complete with the original Triumph Passport to Service, Owner’s Manual, and Handbook. This TR-8 is an extremely nice and very rare 1980 example that is sure bring pleasure to its next to owner. 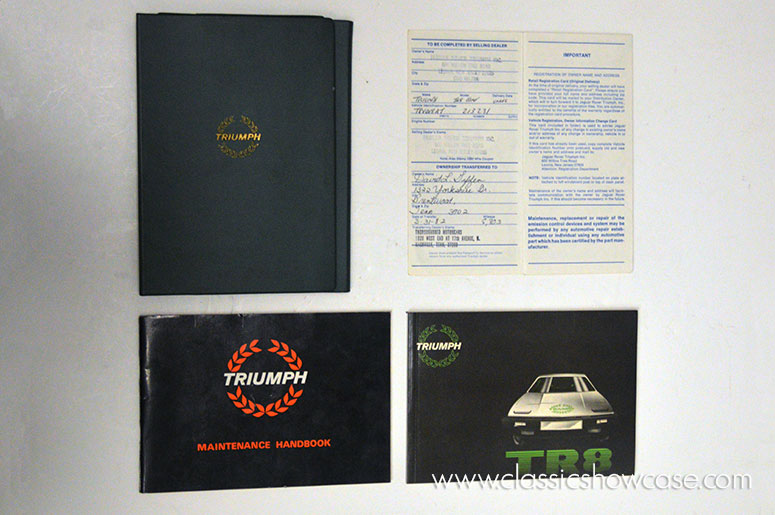 The Triumph TR-8 is an eight-cylinder version of the "wedge-shaped" Triumph TR-7 sports car, designed by Harris Mann, and manufactured by British Leyland (BL), through its Jaguar/Rover/Triumph (JRT) division. Because of its outstanding performance, the TR-8 was often dubbed the "English Corvette". The majority of TR-8s were sold in the United States and Canada. A more powerful V8-engined version of the TR-7 was planned in the early stages of the TR-7's development, a prototype being produced in 1972. However, British Leyland's financial state, labour problems and lack of engines---as MG and Range Rover had first priority---delayed the project. By 1978 some 145 prototype cars were built with V8 engines (and usually automatic transmissions). These "anonymous" TR-8s (no identifying badges, and all coupes) were evaluated for British Leyland by various dealers and then sold off as used cars.