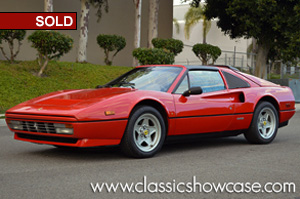 (SOLD) This spectacular Red over Black 1986 Ferrari 328 GTS was discovered in a garage after being stored for several years, in its original state. This car features a striking Red exterior, which was repainted properly using Sikkens paint. The Ferrari retains its original interior, glass, and factory-applied decals – which include the import VIN tag on the door, as well as the Rosso Corsa BASF Glasurit paint-code sticker on the trunk panel. The car’s original jack and storage bag, as well as factory roadside equipment accompany the car.

After rediscovery, the Ferrari was professionally evaluated and serviced, which included a compression test (confirming a healthy engine), an oil and filter change, and a full detailing.

More recently, Master technicians have performed a 30,000-mile major service and adjustments to the car (even though it only showing 22k miles on the odometer), a full rebuild of the water pump, and valve adjustments with new valve gaskets installed. Replacements included the following: timing belt, tensioner assembly & both idler bearings; and all V-belts and filters. The car's engine and gearbox oil was changed, along with a complete flush of the cooling and brake systems, and a servicing to the A/C system (replaced the compressor and the Freon), which now blows ice cold. They cleaned the spark plugs, and fully inspected & tested the engine's cap / rotor / spark plug wire assemblies, and replaced as needed. The technicians also fully inspected, and adjusted, the car's brakes, shocks, tires, suspension bushings & all cooling lines.

With so much of the car's originality intact - coupled with a host of professionally performed services and part replacements, this Ferrari 328 GTS stands as a fantastic example of a latter-day classic that is ready to take on your favorite drive at a pace only a Ferrari can deliver.

Launched at Frankfurt alongside the 3.2 Mondial 2+2 in 1985, Ferrari’s Pininfarina-designed 328 built upon the successful mid-engine V-8 layout of the 308 GTB and GTS, also penned by Pininfarina. Featuring taut bodylines clearly descended from its predecessors, the 328 was offered in Berlinetta (GTB) and Targa (GTS) forms. Aerodynamic improvements ushered in by the 328 included masterfully integrated bumpers, a new frontal treatment with a wide grille, and a discreet rear spoiler atop the rear roofline. Mechanical updates included a larger-displacement 3.2-litre V-8 engine, hence the new Ferrari’s ‘328’ designation, denoting 3.2 litres and eight cylinders. A recent Octane magazine piece summarized the 328 best, stating “There’s the same glorious howl from the mid-mounted quad-cam V-8 but, in the 328, it uses an extra 200 cc to provide 30 horsepower more than its predecessor along with a lot more torque.” That extra power made the 328 capable of accelerating from rest to 60 mph in under 6.0 seconds en route to a 163-mph top end, representing a significant performance increase over the prior 308. The 328 was produced for only four years until the fall of 1989 when the 348 ts debuted. Just 7,412 examples of the 328 GTS were produced, with the GTS Targa the most popular at 6,068 cars, outselling the GTB by a factor of five to one.