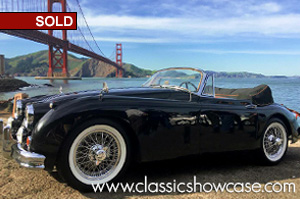 (SOLD) This beautiful 1960 Jaguar XK-150 DHC was delivered new in Canada, and has been a Southern California-kept car since the 1990s. In the 1990s, it received a restoration that consisted of a complete engine rebuild, with the body being restored, and the automatic transmission was taken out and a Tremec 5 speed installed; it was upgraded to disc brakes in the front, with adjustable shocks added; the radiator was re-cored, and it was converted to spin-off oil filter. It is a very good driver, driven regularly since the 1990s, which is how long it has lived in Southern CA. The original color combination is black with a red interior, but the recent owner decided to change it to a tan leather interior with a custom cover for when the top is down. It is a good, honest driver, that needs only a few items attended to in order to make it even better. It comes complete with extensive records of work performed on the car over the years.

As before with the XK range, standard (steel wheel) and special equipment models were available, but a bewildering range of models was to evolve. First, in 1958 the S model was announced, equipped to special equipment specification, and with a more powerful engine, though still of 3.4 liter capacity. Late in 1959 further options became available with the introduction of the 3.8 liter engine, and the XK150 was available not only in 3.4 liter versions, but two versions (normal and "S") of the 3.8. All three body versions were available with all the engine options. Production all but stopped after 1960, but very few cars appear to have been manufactured in 1961.