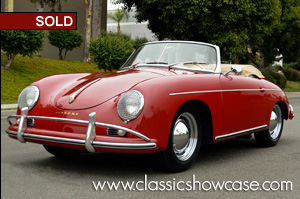 (SOLD) Here is an incredible opportunity to own a very solid, extremely nice example 1959 Porsche 356 A 1600 Super Convertible D. This incredible survivor has had a good life over several caretakers, where it was properly maintained, and cared for, for over 50 years. It has minimal wear and nice patina. It remains its original Ruby Red exterior and Light Brown interior, with US bumpers as delivered new. It has a Porsche Certificate of Authenticity to verify its birth colors, and numbers. Delivered November 26, 1958, it went to Hoffman NY, where it started its life in the US. During its ownership, the original engine was taken out of the car, and replaced with a rebuilt 356 B engine. This Porsche also comes with the original matching block. One of only 1,331 models made during production, the body is the same as a Speedster, expect for the taller windshield, and roll up windows. This car has been recently serviced, and has received a full vehicle detail by marque experts, Classic Showcase of Oceanside, CA. It was fit with a new convertible top, was shod with new tires, it had its distributor rebuilt and set up properly, had a new correct master cylinder installed, a major tune up was performed with fluids changed, a cosmetic detail to the engine was performed, new 6-volt battery was installed, as well as many other aesthetic improvements carried out to take the 356 to a higher level. A file of receipts will accompany the car, as well as the PCOA, and the original engine block.

The Porsche 356 A 1600 Super Convertible D is a 2-door convertible/cabriolet-bodied car with a rear positioned engine supplying power to the rear wheels. The 4 cylinder, overhead valve naturally aspirated powerplant has 2 valves per cylinder and a displacement of 1.6 liters. It has two Zenith 32 NDIX carburetors. By 1958 the Speedster model was four years old, and sales were declining. Porsche realized that significant improvements were necessary to attract buyers, despite the market for a “weekend racer”. The Porsche 356A Convertible D was the replacement in 1959, and with Reutter coachworks straining to keep up with the demand, Porsche contracted with the Drauz Company in Heilbronn to manufacture the bodies for the Convertible D (the “D” stood for Karosseriewerke Drauz KG). The new “Convertible D” featured a taller, more practical windshield allowing improved headroom, roll-up glass side-windows and far more supportive seats. The Convertible D model is arguably the rarest production Porsche 356 model ever manufactured for a full year, with just 1,331 produced between August 1958 and September 1959, with a fraction of those (estimated at 300) ordered with the high compression Super engine. Today’s market feels quite differently, and clearly the late Type A Super cars remain the high-water mark for 356 collectability. 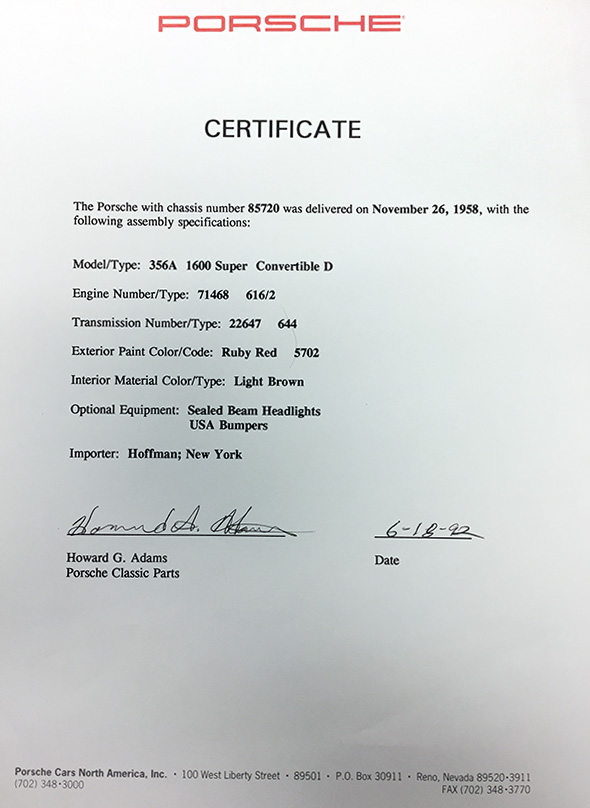