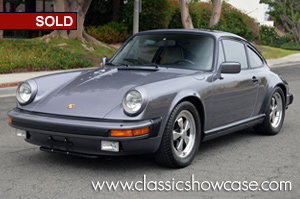 (SOLD) This 1986 Porsche 911 Carrera is a California car and it is in excellent condition. The car has always been maintained and was garage kept and comes with records. It runs and drives very well. It is a superb color combination in Dark Metallic Gray/Oatmeal, with deluxe interior and a leather wrapped steering wheel. This wonderful Porsche features factory air conditioning and a Nokamichi AM/FM CD Player in the dash with 4 speakers and has the optional electric sunroof as well as the optional driving lights and has H4 headlights. This car would make a wonderful edition to the car collector who truly loves Porsches.

The new Porsche went into production in the fall of 1964, and the name had been changed to 911 because Peugeot had copyrighted all combinations of three numbers with a zero in the middle. One body style was all one could get on the early 911 but in September 1965, the Targa was introduced at the Frankfurt show. The Carrera made its debut at Frankfurt in 1955 and production stopped in 1967. In late 1972, the Carrera name returned. By 1985, Porsche had built more than 200,000 of the 911 series in its various forms. Warranty coverage was extended in 1986, with vehicle coverage for two years and unlimited mileage, five years or 50,000 miles on the power train, and ten years on rust perforation..