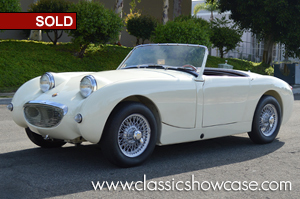 (SOLD) This 1958 Austin Healey Bugeye Sprite Mark I is an open two-seater roadster, and makes for one great little sports car. Completed at the Austin-Healey Works in June 30, 1958, the Bugeye was dispatched for the U.S. market on July 4th of that year, and in recent times was comprehensively restored by Austin-Healey professionals. During the comprehensive restoration, the engine was upgraded to a 1275 cc motor with a 5-speed transmission, and the car’s red interior was newly trimmed in its correct British materials. The car exhibits many nice details throughout, including dual horns, a heater control switch, signal lenses for the dash – all nicely presented, along with the owner's manual, tool kit, and British Heritage Trust Certificate verifying the authenticity of the car. The Bugeye includes the “All-Weather” equipment option which includes a black Tonneau cover. This Sprite is exceptionally fun to drive and handles superbly with increased horsepower and disc brakes for better stopping; experience the Bugeye on an open road as you accelerate and shift gears through the turns and enjoy the improved braking performance. This Sprite is a real head turner in every regard, and great choice for British rallies and events where it would be enjoyed and admired. We have done the following work to the Bugeye since in our care:

• We spot painted as there were several areas of paint flaws.
• We wet sanded and buffed it afterwards to improve the paint.
• We tidied up the engine compartment, and redid the wiring to be more British correct, and make everything work properly.
• We installed a radio blanking plate on the dash with the name “Sprite” on it
• We took the seats and carpet out, added foam, and fixed the shapes of the seat.
• We adjusted the carpet to fit better so it would be tight in the tunnel area.
• We installed a spare tire tie down, and painted all 5 wheels to match.
• We painted the engine, and performed a tune up and service.
• We painted the radiator, and the heater system.
• We put new badges on the engine, and changed all the hose clamps.
• We painted the undercarriage, and spot painted body color underneath.
• We installed new shift bushings in the transmission.
• New stock suspension parts were installed
• Anything that needed to be done to bring the car up to a Show/Driver level, was attended to.

The Austin-Healey Sprite is a small open sports car which was produced in the United Kingdom from 1958 to 1971. The Sprite was announced to the press in Monte Carlo by the British Motor Corporation on 20 May 1958, just before that year's Monaco Grand Prix. It was intended to be a low-cost model that "a chap could keep in his bike shed", yet be the successor to the sporting versions of the pre-war Austin Seven. The Sprite was designed by the Donald Healey Motor Company, with production being undertaken at the MG factory at Abingdon. It first went on sale at a price of £669, using a tuned version of the Austin A-Series engine and as many other components from existing cars as possible to keep costs down. When the Mk. II Sprite was introduced in 1961 it was joined by a badge-engineered MG version, the Midget, reviving a model name used by MG from the late 1920s through to the mid 1950s. Enthusiasts often refer to these later Sprites and Midgets collectively as "Spridgets." The MG-badged version of the car continued in production for several years after the Austin-Healey brand ceased to exist.