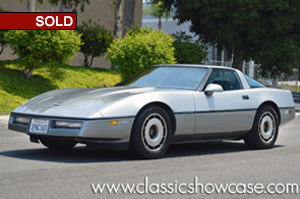 (SOLD) This all original, one owner, 1985 Corvette has always been garaged, and presents in good condition today. It sports the classic Corvette colors of Gray and Charcoal. It is clean, runs great, has had the A/C overhauled, comes with power brakes, has had a new radiator and new hatchback lifters installed, and has just passed its CA smog tests. It is ready for its new home, coming complete with a car cover, wheel lock (in center console), and the wrench for the T-top. This spirited machine can turn the everyday drive into an experience as it has great acceleration, and has exceptionally potent power.

The Chevrolet Corvette (C4) was a sports car that was produced by Chevrolet for the 1984 through 1996 model years. The convertible returned, as did higher performing engines, exemplified by the 375 hp (280 kW) LT5 found in the ZR-1. Though prices rose even as sales declined, the fourth generation Corvette won its own loyal following as one of the United States' most desirable sports cars. The last C4 was produced on June 20, 1996. The C4 Corvette was known for its evolved, sleek and modern look. In a departure from the fiberglass panels of its forbearers, the C4's rear bumpers and panels were made from molding plastics, a sheet molding compound. The C4 fastback coupe was the first general production Corvette to have a glass hatchback (the limited edition 1982 Collector Edition being the first Corvette equipped with this feature) for better storage access. The Corvette C4 came standard with an electronic dashboard with a digital liquid crystal display dash, with graphics for speed and RPM and digital displays for other important engine functions. The C4 represented a clean break from the previous generation of Corvette with a completely new chassis and modern, sleeker styling. Since emissions regulations were still changing and electronic engine management was in its infancy, horsepower was, compared to earlier generations, low. Therefore, the primary design emphasis, at least for the launch, was on handling and braking, with all-independent suspension with light-weight suspension and wheels, and all new brakes with aluminum calipers. The front suspension saw the C3's coil springs replaced by a transverse fiberglass mono-leaf spring, which was only 1/3 of the weight of the coil springs while also introducing an anti-roll bar-like effect on the front. The price of this no-holds-barred emphasis on handling was ride comfort, especially with the Z51 performance and handling package. The C4 did not use separate body-on-frame construction like its predecessors. Instead, it used what GM termed a "uniframe", which consisted of a traditional perimeter frame, with the door posts, windshield frame, halo, and the rear portion of the floor pan integrated into one welded assembly. This was not a unibody assembly, as none of the exterior body panels were structural members. Due to a styling decision to use a targa top instead of T-tops, there was no structural member tying the windshield frame to the halo as on the C3. This required extremely tall side rails on the frame to maintain chassis rigidity, and as a result, the door sills were quite deep, with entry and exit likened by contemporary auto journals to a "fall in and climb out" experience. The targa top bolted into place, becoming a structural component, rather than simply latching on like T-tops.