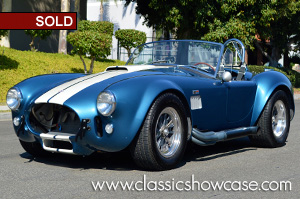 (SOLD) Here's your chance to own a well sorted and setup Cobra with less than 2000 miles on the clock! This Cobra features a Fiberglass body, 4-speed transmission, and includes a Certificate of Authenticity from Shelby American, Inc. This absolutely stunning Cobra is ready to be driven, raced, and shown at your favorite Concours or racing event! The Shelby Cobra Re-Creation Roadster combines 60's designing with modern day styling. The Shelby Cobra Re-Creation Roadster provides the ultimate in quality finishing, with advanced ergonomics, and passenger comfort in a spacious interior. It offers lightning quick performance, superb handling, compliant ride comfort and excellent braking ability in a well-rounded package that is unrivaled for performance, quality and value. The Cobra has been designed and developed for the person wanting to stand out of the crowd and own one of the most exhilarating cars on the market.

1965–1966 Shelby cars were the smallest and lightest of the GT 350 models. These cars are often called "Cobras", which was the Ford-powered AC-based two-seat sports car also produced by Shelby American during the same period. Both models use the Cobra emblem, similar paint scheme, and the optional "Cobra" valve covers on many GT350s that were part of a marketing tie-in by Shelby, as well as one of his iconic symbols. All 1965–66 cars featured the K-Code 271 hp (202 kW; 275 PS) 289 cu in (4.7 L), modified to produce 306 hp (228 kW; 310 PS). Marketing literature referred to this engine as the "Cobra hi-riser" due to its high-riser intake manifold. Beginning as a stock Mustang with a 4-speed manual and 9" live rear axle, the cars were shipped to Shelby American, where they received the high-riser manifolds, Tri-Y headers, and were given larger Ford Galaxie rear drum brakes with metallic-linings and Kelsey-Hayes front disc brakes. The 1965 G.T. 350 was not built for comfort or ease of driving. There were 34 "G.T. 350R" race-spec cars built specifically for competition use under SCCA rules, and the model was the B-Production champion for three straight years.[2] The 1966 G.T. 350 had featured more comfort of casual drivers that included rear seats, optional colors, and an optional automatic transmission. This trend for additional features continued in following years, with the cars becoming progressively larger, heavier, and more comfortable, while losing much of their competitiveness in the process. The 1969 G.T. 350s and 500s were largely styling modifications to a stock Mustang. By 1969 Carroll Shelby was no longer involved in the Shelby GT program, and the design was done in-house by Ford. The 1965 and 1966 G.T. 350s were delivered from Ford's San Jose assembly plant in body in white form for modification by Carroll Shelby's operation, originally in Venice Beach and later at Los Angeles International Airport. San Jose cars carried an "R" in the Ford VIN denoting that facility.[3] The only year that Shelby Mustangs from the 1960s came from another plant was 1968, where they came from New Jersey, "T" in the VIN,[4] and were modified by A.O. Smith. All 1965 G.T. 350s were painted Wimbledon White with Guardsman Blue rocker stripes. Very few GT350s were delivered to the dealer with the optional "Le Mans" (or "LeMans") top stripes, which run the length of the entire car. Approximately 28% of the 562 1965 cars built had Le Mans stripes. Dealers often added the stripes, probably at the customer's request.nToday, it is difficult to find a GT 350 not so equipped.