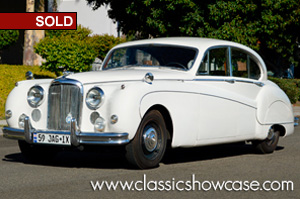 (SOLD) This 1959 Jaguar Mark IX Saloon presented here has a lot of potential, and is a great candidate for further restoration. Because it is a good driver currently, you can drive and enjoy it now, and then restore it as you go. It is hard to find good survivors like this one for sale today, that have a lot of patina, and come with the great features that the Mark IX offers. It has the rare factory bucket seats installed in the front, with deep, rich wood accompaniments on the dash, doors, and include the rear package trays, which complete the stylish look. Inside, the dash it has full instrumentation, and features a RadioMobile radio. This Jaguar is dressed in Old English White, and a rich Dark Blue leather, which appears to be the original leather, and shows its patina. The headliner and sun visors are in very good condition, the sunroof is factory installed, and in good order. This Jaguar is a 5-passenger car that comes with a boot large enough to hold several sets of golf clubs, luggage, or plethora of items needed for long distance traveling.

The engine is strong with SU carbs, and a manual transmission. The chrome is in respectable condition, with a beautiful front grille, bumpers, and a gleaming hood ornament, which give it a very fetching look.

Recently, Classic Showcase has performed a major service to make it a good driver.

The services we performed are as follows:

• Clutch master cylinder - rebuilt
• Brake master cylinder - rebuilt
• Power steering pump - rebuilt, and resealed
• Serviced all of the front suspension. Replaced all the bushings, and ball joints.
The driver’s side, upper ball joint-replaced a missing sealing boot
• Serviced the steering linkage
• Replaced the cover for the voltage regulator
• Changed the oil, filter, and all fluids
• The clutch reservoir - resealed
• Replaced the negative battery cable. Replaced all the battery cable boots on the starter solenoid
• Cleaned and re-installed both shifter bushings that were worn out
• Replaced the stud holding the passenger sun visor up
• The interior and trunk: removed the carpet, and cleaned
• The wiring under the dash board: inspected connections, tightened up any loose connections,
and then organized the wires.

The Jaguar Mark IX is a large luxury saloon car produced by Jaguar Cars between 1959 and 1961. It replaced the previous Mark VIII, and differed little in exterior appearance except for the new model name. Standard transmission was a four-speed manual system: options included overdrive, but most cars were built with a Borg Warner three-speed automatic box. Internally, an enlarged-bore 3.8 L, 220 bhp DOHC straight-6 replaced the previous 3.4 L 190 bhp unit. Two SU carburetors were fitted. Four-wheel servo assisted Dunlop disc brakes and recirculating ball power steering was now standard equipment. The torsion bar independent front suspension and leaf-sprung rear live axle were retained from the Mk VIII. The body was generally similar to its predecessor, but the sunshine roof became a standard fitting for the UK market. The interior was in the same luxurious mode with extensive use of leather, walnut wood trim and deep pile carpet. A range of single and duo-tone paint schemes was offered. Between 1959-1961 Jaguar produced 10,009 Mark IXs.