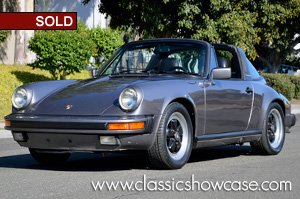 (SOLD) This very original Porsche 911 Carrera has been well maintained, and cared for. Born on the 17th of January 1985, it features factory air conditioning, speed cruise, tilt wheel, power windows and locks, a Blaupunkt “Monterey” Radio, forged alloy wheels, and leather seats. Dressed in its original color combination of Meteor Grey Metallic, over a Black leather interior, this beauty comes with its original window sticker, build sheet, Porsche Certificate of Authenticity, its owner’s manuals & books, and an abundance of maintenance receipts. The original master saver spare tire, and wheel locks are also included. Classic Showcase is performing a full service and detail, inside and out, so it will be ready for its new home. The Carrara models are known by Porsche people, to be the best handling, improved models to own for the money spent. Making these highly collectable, and fun to drive. This Porsche is a great example, and would make a great addition to your car collection, or as an everyday driver.

The 3.2-liter 1984 Porsche 911 Carrera debuted hot on the heels of a very successful run of 911SC models, that were built from 1978 to 1983. The Carrera shared most of its visual cues with its immediate predecessor, but benefitted from added power and performance, as well as other evolutionary updates. The cars came as they had when the SC bowed out—in Coupe, open Cabriolet, and the in-between Targa body styles. The chief upgrade in the Carrera was the larger 3.2-liter flat six engine, which looked much like that of the 3.0 it replaced, but was built chiefly of all-new parts. One crucial change was an improved timing chain tensioner, which had been an issue on previous models. Also new, was Bosch Motronic fuel injection, which replaced the K-Jetronic system of yore. The engine produced 200 horsepower, and came mated to a Getrag five-speed manual transmission. This was enough to propel the Carrera from 0 to 60 mph in about 5.5 seconds. Standard goodies included leather upholstery, air conditioning, power windows, a sunroof, and 15-inch alloys, while cruise control, 16-inch wheels, and an AM/FM/cassette stereo were also popular options Changes were few for 1985, though the Turbo Look package now carried over to Cabriolets and Targa’s.