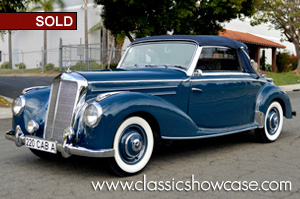 (SOLD) Doubtless, few would argue with the sleek styling of the Mercedes 220 Cabriolet A. From the front, the 220 is trimmed with a chrome bumper, two small independently mounted headlamps, a large crisply angled grille for airflow, and two large headlamps. In past models, the large headlamps had been styled in a similar fashion as the smaller lamps, attached as a separate unit, but streamlining them into the fenders supposedly modernized the look of the car. Below the fenders are some rather spectacular original hub caps that are painted to match the body color, in addition to whitewall tires. In the early 50’s, this tire choice would have been considered flashy, as all-black tires had been available for 20 years. Originally, whitewall tires were produced from naturally white rubber on the side and black rubber underneath, which was far more durable. Whitewalls became a style choice due to the difficulty associated with keeping them clean. However, I think you will agree that, stylistically, they partner extremely well with the overall charm and feel of the vehicle.

Made from beautifully textured cognac pigskin, the luggage is designed to fit the available trunk space perfectly. This set is in pristine condition, and from a style perspective, they are a favorite touch to an already impressive vehicle. An investment grade Mercedes-Benz for the most astute collector, investor, or enthusiast, who demands the best.

As World War II ended, Daimler-Benz AG was in precarious health. As a result of Allied bombing, its plants were largely rubble and the company’s administration were in shambles. For several years, the only Mercedes-Benz passenger cars were continuations of the four-cylinder 170V, a modest middle-class car that had been the best-seller in the 1930s. Introduced at the Frankfurt Auto Show in 1951 alongside the 300 and 300S, the 220 was a development of the 170 using a reinforced 170S cruciform chassis with wider front and rear track and a new 2.2-liter inline-6 engine rated at 80 HP. Styling was similar to the 170, but its headlamps were flared into the front fenders instead of free-standing, giving the car a more up-to-date appearance. The engine, however, was completely new. It was a 2,195-cubic centimeter inline-six that had a single overhead camshaft operating the valves and short rocker arms. It was novel not only in its architecture but also for its dimensions. The cylinders stroke was shorter than the bore dimension, over square in engineering parlance, or short-stroke to enthusiasts, and it was unusual in Europe at the time. The new 220 kept the 170’s conservative overall styling, but its performance set the tone for future Mercedes with its smooth-running, high-revving engine and sophisticated independent suspension inspired by such forbears as the spectacular pre-war 540K. It became the mainstay of Mercedes-Benz’s line, and derivatives remained in production until the 1970s. More than 16,000 Mercedes-Benz 220’s were sedans, but more discerning buyers also had the option of ordering a two-three seat Cabriolet A or a full four-seat Cabriolet B. In these four years of production 16,154 saloon models, 1,278 cabriolet A, 997 cabriolet B (from 1954) and only 85 coupe models were built. The cabriolet and coupe models are rare and highly sought after.