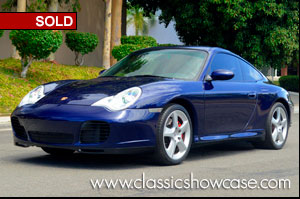 This 2004 Porsche C4S is a Southern California car that combines the Carrera 4's all-wheel-drive chassis and 3.6-liter, 320-horsepower, non-turbo flat-six with the wide rear fenders, larger rolling stock, and other body-style revisions normally reserved for the 415-horse Turbo, creating a perfect blend of the standard Carrera and more aggressive Turbo's appearance. This example features clean Carfax and Autocheck vehicle history reports, and a number of desirable options; the C4S is powered by a strong 3.6-liter, 320-horsepower engine, and features all-wheel drive, ABS and driveline Traction control, 4 tailpipes, 18 inch Aluminum wheels, and gaping air vents on the exterior of the car. In the inside, the C4S offers a full instrumentation, a large screen Navigation and Stereo system with high-end Bose speakers, fully powered and heated leather seats, and Tilt steering wheel. The Porsche includes all factory books including the Porsche Communication Management System Manual.

The Type 996 introduced in 1998 represented two major changes for the venerable 911 lineage: a water-cooled flat-6 engine replaced the popular air-cooled engine used in the 911 for 34 years, and the body shell received its first major re-design. Changing to a water-cooled engine was controversial with Porsche traditionalists, who noted this as the end of the 'true' 911. The 996 styling shared its front end with Porsche's mid engined Boxster. Pinky Lai's work on the exterior won international design awards between 1997 and 2003. The Type 996 spawned over a dozen variations, including an all-wheel-drive Carrera 4 and Carrera 4S (the latter which had a 'Turbo look') models, the club racing-oriented GT3 and GT3 RS instead of a Carrera RS variant and the forced-induction 996 Turbo and GT2. The Carrera and Carrera 4 underwent revisions for model year 2002, receiving clear lens front and rear indicator lights which were first seen on the Turbo version two years earlier. This allowed the 911 to be more distinguishable from the Boxster. A mildly revised front fascia was also introduced, though the basic architecture remained.