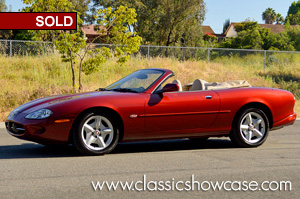 (SOLD) Here is a great opportunity to own a nice XK8 that has been pampered since new. It started its life in Florida, and has been a California car for the last half of its life, with no snow or ice to cause rust issues. It has an elegant color combination, with a beautiful burl walnut dash and trim. Comes complete with original books and extra keys. It has had a recent service, and is loaded with factory options: Air conditioning that blows cold, power steering, power brakes, power seats, power windows, power convertible top, factory AM/ FM cassette stereo with CD disc changer, and full factory instrumentation. The XK8 is a fabulous handling car with good power, and is very comfortable and sporty. The last owner purchased the car with approximately 55,000 miles and put about 10,000 miles on the car over the past 3 years. Several years ago, the engine was gone through, and the car received four new struts, new front/rear brakes, new battery, new tires were installed, and the two front seats were recovered with Jaguar upholstery. More recently, the car has been meticulously maintained by an independent Jaguar Repair shop locally, where they just went through the entire car including: filters, fluids, and spark plugs. There are over $7,500 in receipts for the work performed in the last few years. Also, the tensioner belt service was just done at 60K miles. All receipts are available.

Styling of the new XK8 luxury coupe and convertible was clearly inspired by Jaguar's famous old XKE (E-Type) sports car of the 1960s. Unveiled for 1997, the rear-drive sport Jaguars replaced the XJS design that had been around for 21 years. In fact, the new models also bore some kinship to the XJS, using part of its rear-drive platform and the same basic suspension, and riding a nearly identical wheelbase. Jaguar claimed a 25 percent increase in body stiffness over the XJS. Jaguar's first V8 engine went under the hood, a 4.0-liter aluminum unit with twin overhead camshafts and four valves per cylinder. Also new was the 5-speed automatic transmission, from the German ZF company. In its novel console-mounted "J-gate," a 2-plane shift quadrant permitted manual gear selection when the lever was moved to the left-side slot. Dual front airbags and antilock 4-wheel disc brakes were standard, along with speed-sensitive power steering. The 17-inch wheels held Z-rated tires. The convertible has a fully lined power soft top with glass window and electric defroster. Both models had Automatic Stability Control, which throttled back engine power to maintain traction during low-grip conditions. Full traction control, which also applied brakes as needed, was part of an optional All-Weather Package that included heated seats and headlamp washers. Jaguar's sport-luxury duo added a few features to the 1998 XK8, including automatic on/off headlamps and a security system with engine immobilizer to prevent "hot wiring." Steering-wheel controls operated the cruise, audio, and optional telephone functions.