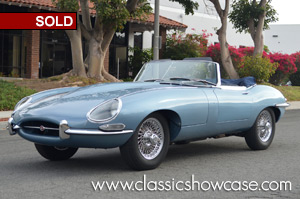 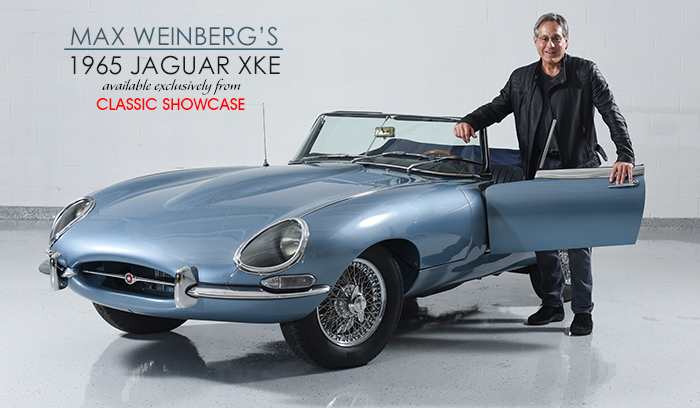 Max discusses his introduction to the Jaguar E-Type:

“In 1965 I was a 14 year old aspiring rock drummer with dreams of the big time. British musician and producer, Dave Clark was for me the first among equals as a drumming inspiration. A distinctive and classy player, Dave led his own band, the Dave Clark Five who rivaled only The Beatles for room at the top of the charts during the so-called British Invasion of the early 1960’s. Plus—he had his name written on his bass drum skin!

I saw The Dave Clark Five perform in Newark, New Jersey in May of 1964 and, after being in the audience in the fourth row, I became determined to do exactly what he was doing. So I was already a huge fan when their 1965 British version album “Catch Us If You Can” was released I’d never seen anything cooler in my life. The entire group in, around, and on top of Dave’s 1964 Series One E Type.It was beautiful and sexy—as it remains.

When the E Type debuted in Geneva in 1961 it rocked the entire automotive world and my own suburban world as well. I thought, someday I’d lead my own band, have my name on the bass drum, and own a Jag like Dave’s.

Well, I’ve done all three and the many E Types I’ve owned since 1976 have given me a great deal of pleasure—as has playing the drums all these years. I’m delighted to offer for sale my one remaining Jaguar XKE through the clear leader in all things Jaguar, Classic Showcase”.

About the E-Type on offer:

Built on January 18, 1965 it was dispatched February 1st, 1965 and sold to Ellis McClenny from Jaguar Cars in New York. It is the 502nd 4.2L LHD OTS built. The restoration was done on a sound core car hailing from the nice and dry state of Texas, whose prior owner had the car for 28 years. This is a spectacular color combination on a comprehensively restored XKE.

A Heritage Certificate accompanies the car verifying the originality, and that the numbers match. It had been restored by Jaguar professionals and had been well sorted and maintained since the restoration, driven sparingly, and kept in a collection. Currently outfitted in beautiful and classic period-correct colors of Opalescent Silver Blue with a Navy Blue interior and top, it was original Primrose Yellow and Black. In the restoration the brakes were upgraded to Wilwood all-around, and the engine runs ceramic headers. It also features an alloy radiator with auxiliary fan, headers with stainless exhaust, electronic ignition, performance harmonic balancer, gear reduction starter, a 15-inch steering wheel, an AM/FM digital Bluetooth stereo with iPhone jack, Halogen headlights, and a spin on oil filter. With so many Series 1 exclusive features such as covered headlights, triple SU carbs, toggle switches, and comfortable seats, this XKE is a fantastic choice for not only the classic Jaguar enthusiast, but for the new collector in search of a wonderful Series 1 example that is ready to drive and enjoy as it is today.

The Series 1 4.2 is a very user friendly, sporty driver, and one of the most collectable of the E-Types. These are wonderful cars with a 4.2-liter engine with three SU carburetors and a fully synchronized transmission. Some of the features of this model are covered headlights, toggle switches, full instrumentation with styling and a design that was way ahead of its time with center console, and arm rests. Other features of this Series 1 are its steep windshield and tail lights, which are placed above the bumper line in the rear deck. Similarly, the parking lights are above the front bumper line in the front fenders. In 1964 when the 4.2 was tested, fuel consumption was rated road reported at 22 MPG and a top speed of 140 MPH. 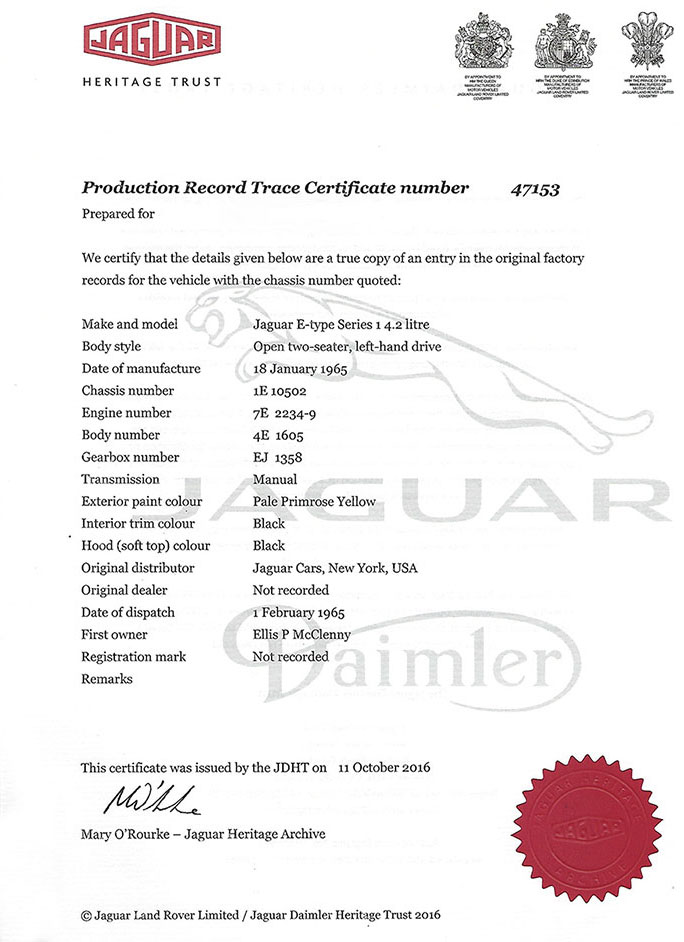