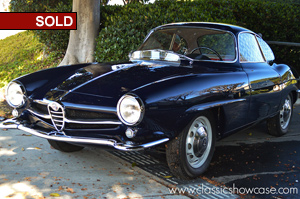 (SOLD) Classic Showcase is pleased to offer this very rare and unique example at a special price. Previously restored, this Giulietta Sprint Speciale remains in very good condition today, and also runs and drives very well. It has a great color combination of Dark Blue with a soft Grey interior, piped in red accents with Red carpeting throughout. The level of detail and finish throughout is impressive, with a fine appearance of authenticity, with it's original serial number tags, body, and chassis number stampings. The Coupe is equipped with it's original engine.

The stunning Sprint Speciale coupe directly descended from Carrozzeria Bertone’s brilliant Bertone Aerodynamica Technica (BAT) design studies of the mid-1950s. With its extremely low drag coefficient of 0.29, it was aimed at competition, and a limited number were produced to meet FIA homologation rules. The Speciale utilized lightweight construction that had been built on the chassis of the popular Giulietta Spider, and it came with a domed roofline and gracefully peaked fenders. The Giulietta’s sturdy 1,300-cc, all-alloy, four-cylinder engine was fitted with a pair of Weber side-draught carburetors, and it could produce a healthy 116 hp. This was enough power to push the slippery two-seater to almost 125 mph, considerably faster than its conventionally bodied Giulietta Sprint coupe and spider siblings. The unique plastic air deflector mounted ahead of the windscreen, which was more commonly seen on competition Ferraris of the era, added to the car’s racy flavor. It is estimated that no more than 1,366 Sprint Speciales were produced between 1957 and 1962, in both Giulietta and larger-engined Giulia form.