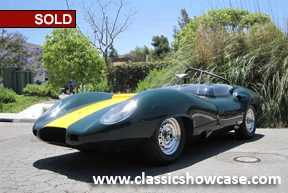 (SOLD) This 1959 Costin Lister Alloy Jaguar replica has the same aggressive yet sleek sylings of the two Costin bodied Lister Jaguars built in 1959. This amazing re-creation was built by Tempero Coachworks in New Zealand in around 1985 and is the only re-creation known to exist. A true performance car, it was raced in vintage New Zeland races, sprints and hill climbs. This lightweight car features a 3.8 liter, 6 cyl engine with a straight head and Lynx manifold, DCOE Weber carbs, headers, coil-over suspension, IRS rear suspension, disk brakes, knock-off wheels and a roll bar. The car comes complete with a USA issued SVRA logbook # 3458.The following information is from Rod Tempero of Oamaru, New Zealand: “Body and chassis supplied to Rod McKenzie of Timaru New Zealand, and finished in metallic blue with light blue racing stripe. The car raced in this form until the 1993 Southern Festival of Speed when it was modified with a 5 speed gearbox rear mounted sway bar and a very low mounted fuel tank replacing the larger unit. In this form it raced in the four races of the series, Ruapuna 6-7 Feb, Timaru 13-14 Feb, Dunedin 20-21 Feb. with these mods it was 14 sec faster around Dunedin than last year. Later in that year it raced a Queenstown road race and placed fourth behind three single seaters and ahead of a Lotus 25. Practiced at Waimate Street race looked and sounded great, blew clutch in first race and retired for the day. Competed in the same races in 1994. About 2002, Barrie Angliss of Tempero Coachworks re-purchased the car and we tidied up the car for resale. Repainted to works colours added D-type wheels and hubs, replaced the engine and gearbox to a more standard spec.”

This amazing re-creation was built in New Zealand and resembled the Costin Lister Jaguars originally built in 1959, one of which was being raced by Sir Stirling Moss. Tempero re-purchased the car around 2002 and refurbished it before shipping it to the United States.