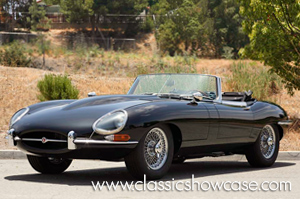 (SOLD) Classic Showcase restored this beautiful E-type to a Show/Driver level. It has been meticulously maintained, well cared for, and previously kept as a part of a large collection. This E-Type is in a very rich color combination of Black & Tan.

Included in the restoration process, the vehicle was stripped to bare metal, placed on a rotisserie, metal finished, leaded, all body parts and chrome were fitted to the car, it was prepared for primer, sealer, paint, base, clear coat, color sanded and buffed to a fabulous finish. All systems such as the electrical, cooling and fuel have been gone through. The engine was rebuilt back to factory specifications, as well as the rear end and suspension, and all mechanical components. The transmission was upgraded to a new 5 speed manual for better handling and performance, with no modifications to the car. The clutch system and hydraulic system were replaced; the car received all new rubber, seals, and a complete new wire loom. The car has received a new correct exhaust system, new battery, the gas tank has been epoxy sealed and radiator was upgraded to an new aluminum radiator with auxiliary fan. All of the brite work was re-plated, or replaced as needed. The car received a complete new custom tailored and fit interior, in the correct materials, by Classic Showcase upholstery department professionals. Also, the car was fitted with a new canvas top with restored bows and hardware.

There is an incredible sound system that was fabricated and custom fitted to the cockpit of the E-Type that includes an Digital AM/FM Stereo with Bluetooth capability. An mp4 pictorial video of the restoration process accompanies the car. This is a fabulous example of a Show/ Driver level for any Jaguar enthusiast to admire and enjoy.