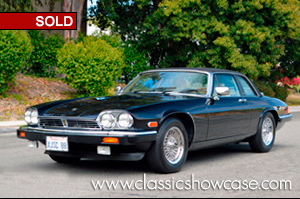 This is an exceptionally rare two owner 1988 Jaguar XJSC Targa Coupe with only 20k miles since new. It is an XJS series Jag with the option to drive with the wind blowing through your hair, or the security of a closed roof environment. Examples like this XJSC here, remain available in limited quantities since so few were sold in the first place. It is 1 of only 3,800 produced between 1985 and 1988. This luxury grand touring Jaguar is in great condition and is a true time capsule of originality that drives like a dream. It comes dressed in its original, deep ebony Black paint with an elegant Magnolia leather interior. Mechanically very sound, it was always maintained by local Jaguar specialists and garage kept. The 5.3L high efficiency V-12 engine is very powerful, silky smooth, and very quiet. This beauty comes equipped with: a 3 /4 automatic transmission, power steering and brakes, power tinted windows and door locks; Burl Walnut trim inlaid with contrasting matching wood inserts; leather upholstery, climate control air-conditioning, driving lights, factory Jaguar AM/FM Radio with tape player, driver airbag, security system, traction control, rear defogger, intermittent wipers, cruise control, and sits upon chrome Sport spoke wheels. Documentation includes an owner’s manual, the XJS parts catalog, original keys, photos of it competing at concours’, some JCNA scoresheets, as well as assorted service and maintenance receipts. This Jaguar runs and drives great and has had a recent service and smog certification. It has been shown over the years in multiple Jaguar concours and has won many awards that accompany the car upon purchase. A well-known car in the Jaguar circuit in Southern California, it is ready for the road, or to be shown. It would make a great daily driver, or a great addition to your collection.

The Jaguar XJ-S (later called XJS) is a luxury grand tourer manufactured and marketed by British automobile manufacturer Jaguar from 1975 to 1996, in coupé, fixed-profile and full convertible body styles. There were three distinct iterations, with a final production total of 115,413 units over 20 years and seven months. Originally developed using the platform of the then current XJ saloon, the XJ-S was noted for its prominent rear flying buttresses. The styling was by Jaguar's pioneering aerodynamicist Malcolm Sayer — one of the first designers to apply advanced aero principles to cars. The 5.3-liter HE V12 features high-turbulence combustion chambers and Lucas CEI injection for a factory-rated output of 262 horsepower and 290 lb-ft of torque in the US market. Shifting is through a 3-speed automatic transmission. From July 1981, the XJ-S was renamed the XJ-S HE and received the new High-Efficiency V12 engine for much better fuel economy. With the Fire Ball combustion chamber designed by Swiss Engineer Michael May, power output was increased as a by-product to 220 kW (295 hp) or 196 kW (263 hp) in North America. At the same time, the XJ-S HE received changes to its exterior and interior (body-colored trunk plinth in place of the standard previous black, new five-spoke (starfish) alloy wheels, chrome inserts on the upper part of the bumpers, burled elm inserts on dashboard and door cappings).