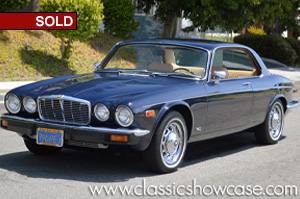 (SOLD) This stunning example was imported through Bauer Motors of Costa Mesa, California and has spent its entire life in the state of California. It sports its’ original blue and yellow California license plates, which makes the car that much more special as this demonstrates that it has lived in a mild climate its entire life.

With limited ownership, this handsome XJ6C is garbed in Dark Blue with a Biscuit leather interior. Recently, a Jaguar specialty shop performed a bare metal re-spray, with all the glass taken out. After the paint was done, the car was taken to have its upholstery redone with brand new leather (not a kit), and they stamped the leather with the original diamond pattern as the car came stock with, and they duplicated the original pleating width. Both the front and the rear seats were recovered in Connolly leather, and they replaced the headliner. The dash wood was replaced with a new one from Madera Concepts. All the other panels, carpet, and interior items are original and in good shape.

This Jag still has its original 4.2 liter straight six engine with three speed automatic transmission. It has a new power steering rack and battery, and it runs, drives, and handles beautifully on the road. The air-conditioning system blows cold and has a rebuilt A/C compressor. Everything works on the car as it should.

Coming with a plethora of documentation from the last ownership, and from the one before, there are also some service records dating back to 1981. The Jag made its way up the California coast from Southern California and was owned by a woman in San Francisco for many years. A Bentley and Rolls Royce collector had been trying to purchase the car from her for many years when he lived in San Francisco and saw the car frequently. She finally sold it to him, and he owned the car for 5 or more years before the last owner purchased it from him back in 2013.

The XJ6C was always garaged, and we believe that it has been garaged its whole life based on the condition the car is in currently, and that it had zero rust on it when it was repainted.

Coming with a Heritage Certificate, the original dealer window sticker from Bauer Motors, the “Passport to Service” showing the original owner as Peter Satori Leasing, and its original Owner’s Manual. There are also many service records and scoresheets that come with the car upon purchase. 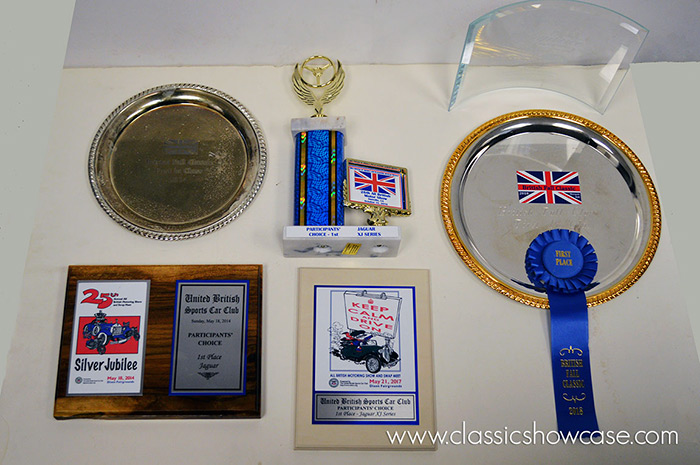 The Sports Touring Coupe is full of power, and while very sporty has more than enough room to accommodate up to 5 adults. It retains its original glass and chrome throughout and features a large trunk that is perfect for storage, and a streamlined body to accommodate it's rare and unique 2-door design. Finished in a beautiful color combination of Dark Blue over Biscuit, the car comes with an Alpine AM/FM stereo, dual mirrors, sunroof, dual exhaust, full instrumentation, and a number of luxury/comfort options including power steering, power windows, power brakes, and factory air-conditioning. The XJ series models have seen a resurgence in popularity as of late, so don't miss your chance to acquire a definitive example of a classic Jaguar design! It is hard to find these cars in original condition that have not been modified. Coming with a recent service, and current smog, it is a great car to drive, and improve aesthetically as you wish, or take to the next level.