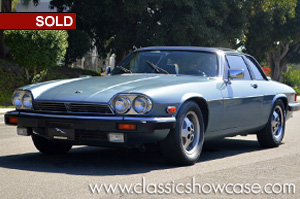 (SOLD) This 1988 Jaguar XJSC is a great driver level California car that is available in limited quantities since so few were sold in the first place, and is fresh from a full service. It is 1 of only 3,800 produced between 1985 and 1988. The 5.3L high efficiency V-12 engine is very powerful, silky smooth, and very quiet. The XJSC comes equipped with a 3/4 automatic transmission, power steering and brakes, power tinted windows and door locks; On the inside it features Burl Walnut trim inlaid with contrasting matching wood inserts, leather upholstery, climate control air conditioning, driving lights, Kenwood AM/FM Radio with CD player, driver airbag, security system, traction control, rear defogger, intermittent wipers, and cruise control.

• Replaced the fabric on the top with the correct material.
• Cleaned and dyed the interior as needed and conditioned the leather.
• Drained and replaced with fresh fuel.
• Removed the fuel injectors and had them inspected, cleaned, and reinstalled.
• Replaced the injector lines.
• Replaced the fuel pump and fuel filter.
• Steam cleaned the bottom of car.
• Serviced the brakes.
• Replace some light lenses.
• Changed the fluids.
• Performed a full vehicle detail.

This XJSC would make a great daily driver and is a highly collectible model.

The Jaguar XJ-S (later called XJS) is a luxury grand tourer manufactured and marketed by British automobile manufacturer Jaguar from 1975 to 1996, in coupé, fixed-profile and full convertible body styles. There were three distinct iterations, with a final production total of 115,413 units over 20 years and seven months. Originally developed using the platform of the then current XJ saloon, the XJ-S was noted for its prominent rear flying buttresses. The styling was by Jaguar's pioneering aerodynamicist Malcolm Sayer — one of the first designers to apply advanced aero principles to cars. The 5.3-liter HE V12 features high-turbulence combustion chambers and Lucas CEI injection for a factory-rated output of 262 horsepower and 290 lb-ft of torque in the US market. Shifting is through a 3-speed automatic transmission. From July 1981, the XJ-S was renamed the XJ-S HE and received the new High-Efficiency V12 engine for much better fuel economy. With the Fire Ball combustion chamber designed by Swiss Engineer Michael May, power output was increased as a by-product to 220 kW (295 hp) or 196 kW (263 hp) in North America. At the same time, the XJ-S HE received changes to its exterior and interior (body-colored trunk plinth in place of the standard previous black, new five-spoke (starfish) alloy wheels, chrome inserts on the upper part of the bumpers, burled elm inserts on dashboard and door cappings).