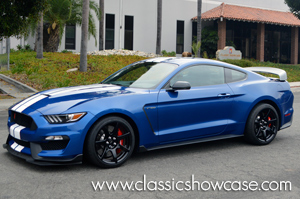 If you’ve ever wanted to experience an amazing, limited-edition sports car equipped with an ultra-high-performance package, we have just the supercar ready for you. This spectacular Shelby comes from a long line of esteemed American sports cars going back to 1965 and is 1 of only 43 GT350Rs delivered in this color combination for 2017. As such a limited production car, Ford dealerships were allocated a very limited stock, thus creating an insatiable demand; so much so that these cars were offered at a premium that often exceeded the factory Monroney sticker. This ‘R’ iteration of the GT350 is a race-spec designated car that complies with racing competition rules, and as such is significantly more powerful than its 350 counterpart…

Driving and Comfort options of the GT350R package include:

Mechanical Upgrades and Options include: 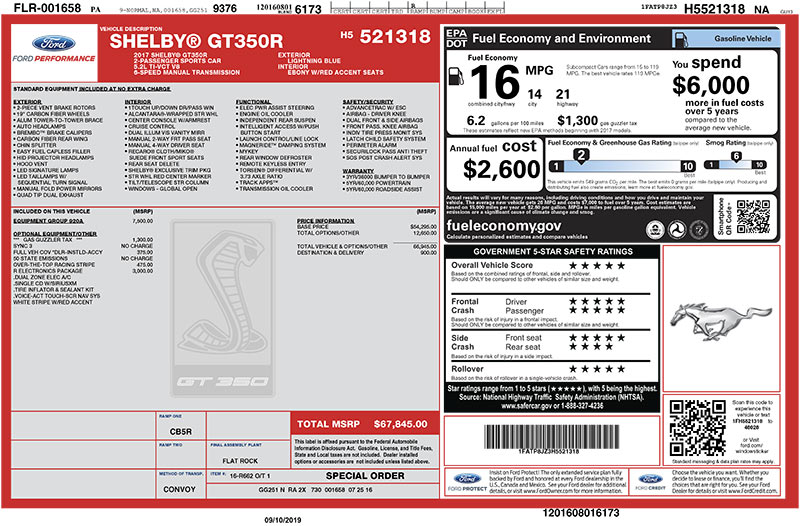 At the 2015 North American International Auto Show a more track-focused, hardcore and limited production version of the GT350 was unveiled called the GT350R, benchmarked against the Chevrolet Camaro Z28 and Porsche 911 GT3. The GT350R retains the GT350's 5.2-liter flat plane crank V8 engine, producing the same power, but grip was significantly increased by the means of wider Michelin Pilot Sport Cup 2 tires, Carbon Revolution carbon fiber wheels (the first ever fitted to a mass-production road car) each weigh approximately 15 pounds less than the aluminum wheels on the GT350, and significantly more downforce thanks to a larger splitter and carbon-fiber rear wing to keep the car stuck to the ground. Items like the air conditioning, stereo, trunk floorboard, all the carpeting, the rear seats, and the backup camera could be removed from the factory resulting in the GT350R weighing 130 lb (59 kg) less than the GT350. The GT350R won Road & Track magazine's 2016 "Performance Car of the Year" (PCOTY) and Car and Driver magazine's "10 Best Cars" for 2016. As with previous production-based Mustang race cars, Multimatic Engineering was approached by Ford Performance to develop a complete race-only version of the S550 Shelby GT350R. The resulting competition derivative, the GT350R-C, has safety equipment and roll-over protection homologated to FIA and IMSA specifications; Bosch MS5.0 ECU and ABS controller; MoTeC instrumentation and datalogging; adjustable anti-roll bars; Multimatic DSSV spool-valve dampers and other competition upgrades. Though delayed until the third race of the 2015 Continental Tire SportsCar Challenge, the GT350R-C was competitive right away: having earned pole position for its debut race, the GT350R-C won the next two rounds, and took three wins overall in its debut season. Success continued into 2016 as privateer team C360R finished behind the sole entry of factory-supported team Multimatic Motorsports for a 1–2 GT350R-C finish in the season-opener at Daytona. The #15 Multimatic Motorsports Shelby GT350R-C driven by Billy Johnson and Scott Maxwell continued on to win 6 out of 10 races as well as the 2016 Team, Driver, and Manufacturers Championships.