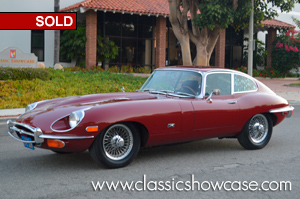 (SOLD) This limited ownership with a good San Diego history Series 2 XKE Coupe is the last production-run equipped with the 4.2-liter six-cylinder twin overhead cam engine. The car is also equipped with a 4-speed synchromesh transmission, 2-side draft Stromberg carburetors, 4-wheel independent suspension with double A arms, torsion bars in the front, 4-wheel servo assist disc brakes, power steering, and a factory-equipped Air Conditioning system; this original factory A/C system has been completely replaced with a new, appropriate system which includes a rotary compressor, and is much more efficient. In addition, the new A/C utilizes the 134A refrigerant for better cooling.

A Series 2 XKE is very desirable because of its comfortable reclining seats as well as head rests, that were adjustable for height; the improved cooling system, and dual fans on the radiator. Leaping cat emblems were only placed on the side of the 1971 XKE bonnet and are a unique addition and symbol of this series. While the Series II E-type was more radically altered than its interim predecessor, the essential construction remained the same and the body work differed only in detail. Modifications were made to the front of the bonnet, increasing the size considerably, the headlamp scoops were altered so that the inner walls now splayed inwards, and the side/flasher were rather larger and positioned below the raised bumper. The vehicle also received heavier front bumper blades, motif bar, front and rear over-riders were changed, new square number plate at the rear, a different grille was used in the rear of the bonnet bulge, and the washer jets were finished in satin chrome to avoid the risk of dangerous reflections.

The short wheelbase FHC body style was discontinued and the V12 was available only as a convertible and 2+2 coupé. The convertible used the longer-wheelbase 2+2 floorplan. The Series 3 is easily identifiable by the large cross-slatted front grille and flared wheel arches, and a badge on the rear that proclaims it to be a V12. Cars for the US market were fitted with large projecting rubber bumper over-riders (in 1973 these were on front, in 1974 both front and rear to meet local 5 mph (8 km/h) impact regulations, but those on European models were considerably smaller. US models also have side indicator repeats on the front wings. There were also a very limited number of six-cylinder Series 3 E-Types built. These were featured in the initial sales literature. When leaving the factory, the V12 Open Two-Seater and V12 2 ± 2 originally fitted Dunlop E70VR − 15-inch tires on 15 × 6K wire or solid wheels.