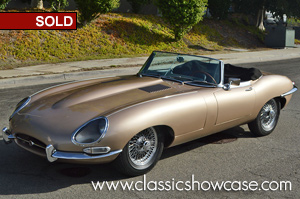 Here is a great opportunity to own one of the most desirable classics ever produced. This 1966 Series 1 E-Type is one of the most desirable models, and comes in a highly attractive color combination of Golden Sand over a Black interior. The roadster has been maintained, enjoyed, and garage-kept by its previous owner. It is equipped with a 4-speed, tripe SU carbs, covered headlights, bucket seats, center console, armrest, full instrumentation, and wire wheels. The XKE is available now ‘as-is’, but would make a wonderful restoration candidate to take to a higher level.