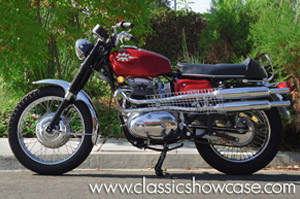 A complete Concours rebuild including engine and transmission by the highly regarded BSA craftsman, Don Harrell, of Visalia, California. It has been ridden just 415 break-in miles. Everything is in ideal working order. This Concours quality Firebird is ready to show or ride with confidence. (*Please note the motorcycle was built in 1969 and titled as a 1970 for the first year it was sold, which often happens with vintage motorcycles.)

The Firebird Scrambler was BSA's contribution to the growing interest in the USA for enduro lookalikes Street scramblers, which had the style of an off-road machine with high pipes and handlebar brace became available from many manufacturers. The Firebird lineage descended from the rare pre-unit A-10 Spitfire Scrambler...released in 1963 as the Spitfire Hornet. In 1966 it became the Hornet. In 1969 there were 260 of a special Canadian model made which resembled the road going BSA Lightning. By 1969, the entire production line for the BSA Firebird was allocated to the American market which had developed a taste for well-tuned street scramblers. The Firebird is, without doubt, one of the most handsome BSAs to grace the streets. It is, for many, a highly desirable piece of metal and, with its strong, well-tempered power delivery and attractive geometry, the 650cc parallel twin is a highly capable machine even by today’s standards. A relative rarity in the UK and New Zealand markets, the Firebird today is one of the most highly sought-after BSA models and a handsome reminder of the very best of BSA design.