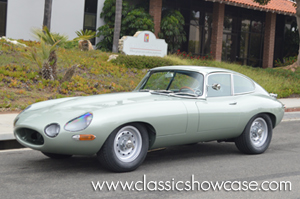 The restoration to this spectacular E-Type is finished! This XKE is a very special build for a special car that has been in the process of restoration around our client projects off and on in our shop for the last few years. This early E-Type Fixed Head Coupe has had it's wheel wells flared, the front and rear bumpers removed with welded-in lines, the gas door has been replaced by a high volume pop-up chrome gas fill assembly, and we are using a new aluminum bonnet that houses recessed driving lights for a fantastic look.

Under the hood, the Coupe is powered by a 3.8 Liter engine with 10:1 pistons. In addition, it has received an Alloy Radiator (with aux. fan), a spin-on oil filter, a Mallory electronic ignition and coil, Weber carbs, custom headers, a 2-inch free-flow exhaust system (with silencers), and sound deadening inside the car. Also included on the build are mild cams, machine crank, a lightened flywheel, gear reduction starter, an upgraded 5-speed transmission, electronic ignition, and a high output battery. The Coupe has also received a set of D-type wheels to add to the overall presentation of this uniquely wonderful E-Type. This Fixed Head Coupe is the perfect choice for the collector who enjoys a faster than average cat!