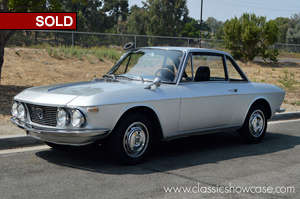 (SOLD) This silver-over-black 1969 Lancia Fulvia Coupe Rally 1.3 S features a 303 series high-compression 1,298cc 4-cylinder engine and 4-speed manual transmission. It was born in and has spent the majority of its life in Italy. This Lancia features Aluminum doors, trunk lid, and hood lid to keep everything light weight. It comes equipped with a functional air scoop on the hood, thin Solex C35 Carburetors, front wheel drive, and an interior with a wood dash and full instrumentation. The Lancia was acquired in 2019, and then transported it to the United States. Once arriving stateside, the Lancia was given a comprehensive servicing by Italian car specialists, who performed a full brake and fuel system service, along with the addition of new rubber door seals to the car. In the fall of 2019, a major comprehensive servicing and sorting of systems was performed, including electrical. In addition, a new headliner, sun visors and a new rear-window package tray were recently installed. Master technicians also performed a braking system overhaul, and the engine bay, trunk and undercarriage were fully detailed. This is your opportunity to own a Classic Lancia known for winning world rally championships in the 1960s and 1970s.

The introduction of the Fulvia saloon in 1963 maintained Lancia's reputation for innovation in automobile design. Designed by Antonio Fessia, the boxy-styled Appia replacement featured an all-new, narrow-angle, V4, overhead-camshaft engine; front wheel drive; independent front suspension by double wishbones; and disc brakes all round. The Fulvia was described as 'a precision motor car, an engineering tour de force', and was lauded by motoring journalists as a jewel of engineering and forward thinking design, as well as being delightful to drive. A 2+2 coupe on a shorter wheelbase was launched in 1965. Though mechanically similar, the beautiful newcomer had all the visual presence its progenitor lacked and came with a 1,216cc engine producing 80bhp. In 1967 the model was up-rated with the 1,298cc, 85bhp engine, becoming the Fulvia Rallye 1.3.