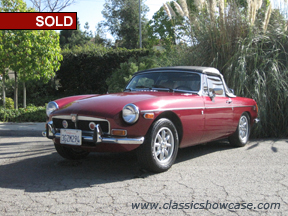 (SOLD) This 1974 MG B Roadster has received a complete vehicle detail inside and out by Classic Showcase. This is a good solid driver that has been regularly serviced and maintained. It has always passed smog in California, but is now smog exempt. Featuring low miles, a Sony in-dash cassette, luggage rack, chrome bumpers, dual mirrors on the doors and a locking gas cap, it is a good example for the MG enthusiast to add to their collection, drive and enjoy. It can be a great introductory sports car for that perfect Sunday drive.

The MGB is a sports car launched by MG Cars in May 1962 to replace the MGA and manufactured until 22 October 1980, originally by the British Motor Corporation and later by its successors.The MGB started out on the drawing board rather than on the racetrack and was to be the first Abingdon design model with complete unit body construction, as it was felt that considerable weight savings could be achieved. The MGB was a relatively modern design at the time of its introduction. It utilized a monocoque structure that reduced both weight and manufacturing costs as well as adding chassis strength. This was a considerable improvement in comparison to that of the traditional body-on-frame construction used on the earlier MGA and T-type models as well as the MGB's rival, the Triumph TR series. The design included wind-up windows and a comfortable driver's compartment, with plenty of legroom and a parcel shelf behind the seats.