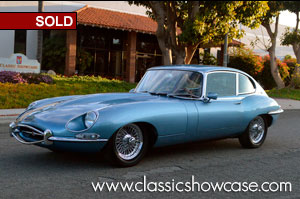 SOLD This 1968 Jaguar E-Type Series 1.5 2+2 is an original California car with limited ownership. This great looking example was kept in storage for a number of years, and recently received over $20,000 in service work performed by master technicians at Classic Showcase, include the following:

This 2+2 runs and drives very well, and is ready for the upcoming Spring and Summer driving seasons!

The Series 1 4.2 2+2 is the most user friendly, and very collectable E-Types. These wonderful cars had a 4.2-liter engine with 2 Stromberg carburetors and a fully synchronized transmission. Some of the features of this model are covered headlights, toggle switches, full instrumentation with styling and design that was way ahead of its time, center console, arm rests, and full synchronization transmission. Other features of this Series 1 are its steep windshield and taillights, which are placed above the bumper line in the rear deck. Similarly, the parking lights are above the front bumper line in the front fenders. A chrome strip beneath the windows on the doors identifies the 2+2. This car first came on the market in 1966 in response to US market pressure for a vehicle with a backseat. The 2+2 was also the first time this vehicle was offered with an automatic transmission which became an option because of the extended length of the vehicle, which permitted the transmission to be installed. In 1964 when the 4.2 was tested, fuel consumption was rated road reported at 22 MPG and a top speed of 140 MPH.