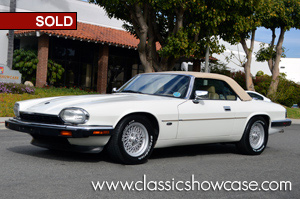 This XJS is a preserved original 2-owner car in a beautiful color combination, white over biscuit that has been very well maintained and is rust free. The past owner has showed the car in 3 J.C.N.A. sanctioned Concours and it has scored 9.979 or higher in each event. It has always been cared for, serviced and well maintained, comes with lots of receipts, books, records, current California smog and it has been recent service.

The Jaguar XJ-S is a luxury grand tourer manufactured and marketed by British car manufacturer Jaguar from 1975 to 1996, in coupé, fixed-profile and full convertible body styles. There were three distinct iterations, with a final production total of 115,413 units over 20 years and seven months. Originally developed using the platform of the then current William Heynes designed XJ saloon, the XJ-S was noted for its prominent rear flying buttresses. The early styling was partially by Jaguar's aerodynamicist Malcolm Sayer — one of the first designers to apply advanced aero principles to cars. Sayer died just before the XJ-S body styling was frozen for production. In its final iteration produced from 1991 to 1996 it was manufactured after Jaguar was acquired by Ford, who introduced numerous modifications — and eliminated the hyphen in the name, marketing Jaguar's longest running model simply as the XJS.