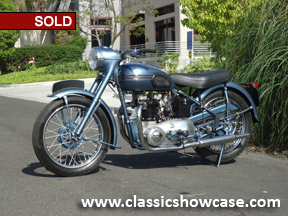 (SOLD) This matching-numbers bike was first registered on 1st December 1954. We understand it had one owner until 1978 and only four owners altogether. While the swing-axle rear suspension did not appear until 1955, this bike has the optional Mk II sprung rear hub, which does allow some travel. Restored some three years ago by the previous owner, it has been recently re-commissioned and is reportedly in excellent condition, complete with a UK V5C logbook and new MoT.

Triumph’s 650 Thunderbird was launched in 1949 and aimed squarely at the American market.The bike’s additional horsepower was also welcomed by sidecar drivers in England as the country struggled with post-war rationing. The T-Bird launch was quite a show, with three bikes lapping the Monthléry circuit in France at over 90 mph for 500 miles, then finishing with a blistering 100 mph lap before being ridden back to the Meriden factory – an extraordinary display of speed and reliability.