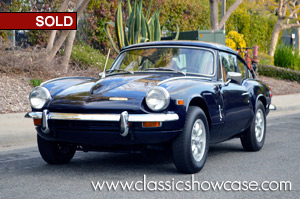 (SOLD) This Triumph GT6+ is a 6-cylinder sports coupé built by Standard-Triumph, and features attractive exterior Dark Blue paintwork, complimented by a Beige leather interior, resting upon a nicely accented set of Minator wheels. The Triumph is powered by an inline 6-cylinder engine with dual Stromberg carburetors, and is ready for your favorite road, or the show circuit.

The team at Classic Showcase has recently performed a comprehensive service and refreshening up of the GT6+ and it is now ready for the upcoming Spring and Summer driving seasons! Please view the extensive list of servicing and upgrades made to the car:

This GT6+ is a great running and driving example, worthy of the seasoned or new Triumph collector's attention!

The Triumph GT6 is a 6-cylinder sports coupé built by Standard-Triumph, based on their popular Triumph Spitfire convertible. Production ran from 1966 to 1973. In early 1963 Giovanni Michelotti was commissioned by Standard-Triumph to design a GT version of their recently introduced Spitfire 4 (also designed by Michelotti). An unmodified Spitfire 4 was delivered to Michelotti's design studios in Italy and late in 1963 the prototype Spitfire GT4 was returned to England for evaluation. The styling of the vehicle was a success but the extra weight of the GT bodyshell resulted in extremely poor performance from the Spitfire's 1,147 cc (70 cu in) Standard SC engine, and plans for producing the Spitfire GT4 were shelved. Michelotti's fastback design for the Spitfire GT4 prototype was adopted by the Triumph racing programme for the 1964 season, as it was deemed to provide an aerodynamic benefit over the standard Spitfire body shape. Fibreglass copies of the Spitfire GT4's fastback were grafted on to the race-modified Spitfires destined for competition. The Spitfire racing programme was successful, and in 1965 resulted in 13th overall and a 1st in class at the prestigious 24 Hours of Le Mans (beating their main rivals, the MG Midgets). The Spitfire's competitive success and the continuing commercial success of the production vehicle led Triumph to re-evaluate its shelved plans for a GT version of the Spitfire. To overcome the lack of performance inherent in the heavier body style the Spitfire's 4-cylinder engine was replaced with the more powerful 2.0 L (1,996 cc) Triumph inline 6 originally derived from the SC and then in use in the Triumph Vitesse (which shared a similar chassis with the Spitfire and Triumph Herald). The car was further developed and refined and eventually launched as the Triumph GT6 (dropping the "Spitfire" prefix) to emphasise its GT styling and its 6-cylinder engine. Contemporary Triumph marketing advertised the GT6 as being developed from the "race winning Le Mans Spitfires" to capitalize on their aesthetic similarities, whereas the Le Mans Spitfires and the GT6 were actually two entirely separate development programmes (the GT programme pre-dating the racing programme). However, the marketing spin was so successful that many people erroneously believed the Le Mans Spitfires to actually be GT6s. 1966 to 1973. 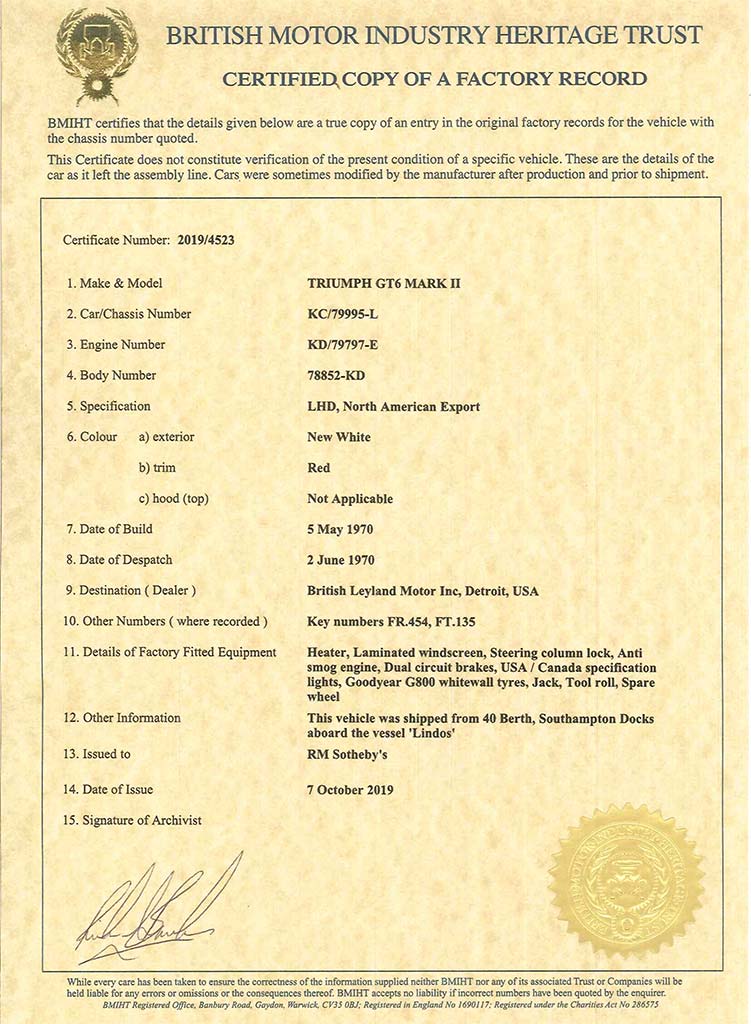