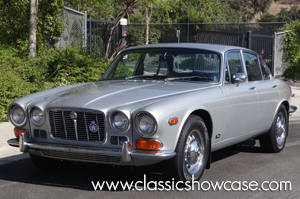 This stylish Silver & Black 1972 Series 1 Jaguar XJ6 sedan is a 2-owner from new car, backed with a fully documented history of ownership. This example is a highly original and well-kept Sedan that is part of the first-generation Series 1 line of XJ6 cars that started in 1968 and continues to this day. Of particular note with this model is that it was one of the last Jaguars to have been produced under the design direction of legendary company founder, Sir William Lyons.

First and foremost, our team sought to preserve the originality and patina of this XJ6 while freshening it up; as such, we performed a full cleanup with very light restoration work and improvements to the car's interior and exterior. In addition, the team performed a full detail under the XJ6’s bonnet, undercarriage, and trunk area.

Mechanically, the XJ6 was fully overhauled to ensure maximum power, performance, and dependability. The team began the process by removing the sedan’s engine and transmission, and shortly after started rebuilding the stock 4.2-liter engine. The XJ6’s original transmission proved to be in good condition and as such was fully inspected and serviced while the engine was being rebuilt. In addition to the engine rebuild, the team performed a number of other mechanical services to the car, including the addition of new parts including:

On the inside of the XJ6, our master trimmer fully refreshed the entire interior, which included work on the seats, dash, back seat, and extensive work in the trunk area. The wooden dash fully compliments the Sedan’s tidy Black interior, and blends well with the car’s sleek silver exterior.

The XJ6 is now ready to be enjoyed, and comes complete with its original owner's manuals, operating brochures, as well as an extra set of keys. Don’t miss this opportunity to experience a well preserved XJ6 and one of the last Jaguars produced under Sir William Lyons!