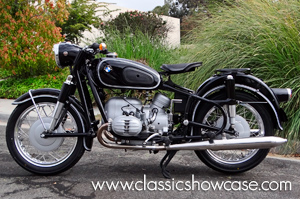 This matching numbers BMW R60/2 is iconic post-war motorcycle that is finished in period-correct Avus Black, and features a 4-speed transmission. The bike is full of patina, presents very nicely, and would make a nice addition to the new or seasoned BMW owner's collection.

In 1961, BMW upgraded the engine of their 600 cc R60 boxer twin and added a /2 to the designation. The /2 series with its Earles Fork has become one of the most collectable post-World War II BMWs. Production continued through 1969, although telescopic fork bikes were produced concurrently near the end of the production run.