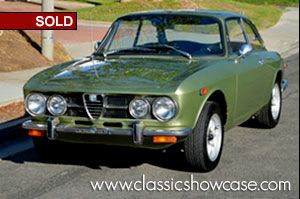 (SOLD) This 1971 Alfa Romeo 1750 GTV is a restored example that features its original interior, along with a number of performance and aesthetic improvements such as a fully rebuilt mechanical fuel injection system, and a new set of tires. Classic Showcase has scheduled a full service and detail to the Alfa for Fall 2020.

The Alfa Romeo 1750 GT Veloce (also known as 1750 GTV) entered production in late 1967 along with the 1750 Berlina sedan and 1750 Spider. The cars were first shown to the press in January 1968. The same type of engine was used to power all three versions; this rationalisation was a first for Alfa Romeo.

The 1750 GTV replaced the Giulia Sprint GT Veloce and introduced many updates and modifications. Most significantly, the engine capacity was increased to 1779 cc displacement (80 mm bore × 88.5 mm stroke, 6.61l oil capacity, 9.58l radiator capacity). Peak power from the engine was increased to 122 PS (90 kW; 120 hp) at 5500 rpm. The stroke was lengthened from 82 to 88.5 mm over the 1600 engine, and a reduced rev limit from 7000 rpm to 6000 rpm. Maximum torque was increased to 186 N⋅m (137 lb⋅ft) at 3000 rpm. A higher ratio final drive was fitted (10/41 instead of 9/41) but the same gearbox ratios were retained. The result was that, on paper, the car had only slightly improved performance compared to the Giulia Sprint GT Veloce, but on the road it was much more flexible to drive and it was easier to maintain higher average speeds for fast touring. For the United States market, the 1779 cc engine was fitted with a fuel injection system made by Alfa Romeo subsidiary SPICA, to meet emission control laws that were coming into effect at the time. Fuel injection was also featured on Canadian market cars after 1971. Carburetors were retained for other markets.

The 1750 GTV also departed significantly from the earlier cars externally. New nose styling eliminated the "stepped" hood of the Giulia Sprint GT, GTC, GTA and early GT 1300 Juniors and incorporated four headlamps. For the 1971 model year, United States market 1750 GTV's also featured larger rear light clusters (there were no 1970 model year Alfas on the US market). Besides the chrome "1750" badge on the bootlid, there was also a round Alfa Romeo badge. Similar Quadrifoglio badges to those on the Giulia Sprint GT Veloce were fitted on C pillars, but the Quadrifoglio was coloured gold instead of green. The car also adopted the higher rear wheelarches first seen on the GT 1300 Junior.