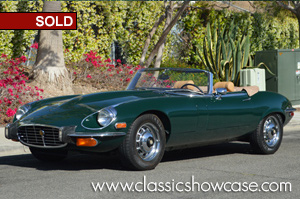 (SOLD) This British Racing Green 1973 Series 3 E-Type Roadster has just undergone a sympathetic cosmetic & mechanical restoration, along with a full service by Jaguar professionals here at Classic Showcase. The roadster features one of the most desirable color combinations of British Racing Green and Biscuit, and is ready to be driven and enjoyed for the upcoming Summer and Fall driving seasons!

• The car was spot painted, compounded, polished and buffed as needed.
• Re-chromed the front grill and surround.
• Installed a new stainless-steel panel around license plate and brake light assemblies.