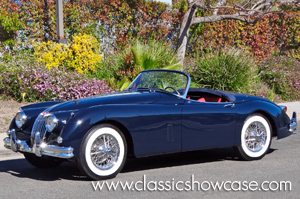 SOLD This Jaguar XK-150 Roadster is in the process of a show/driver level restoration, and is being upgraded to a 150 S-spec, with a 3.4 engine, Triple SU carbs, front and rear disc brakes, and a dual exhaust system among other upgrades; we have rebuilt the engine and transmission, as well as the steering rack and other components. The color combination may be chosen by it's next owner - please inquire at your earliest convenience! The roadster has an estimated completion date of late 2021.

Included in the restoration process of the Roadster: it has already been stripped to bare metal, placed on a rotisserie, metal finished, leaded, all body parts fitted to the car and chrome, prepared for primer, sealer, paint, base, clear, color sanded and buffed to a fabulous finish (in the purchaser's desired color combination). All systems are being gone through and restored: the fuel, electrical, cooling, and hydraulic system. All components are being rebuilt, including the engine, transmission, rear end and suspension. The chrome will be re-plated as needed. The car will receive a complete new custom tailored and fit interior in the correct materials by our upholsterers. An mp4 video of the restoration process will accompany the vehicle. Upon completion of the restoration this Jaguar will be a great example to drive, show, and enjoy!