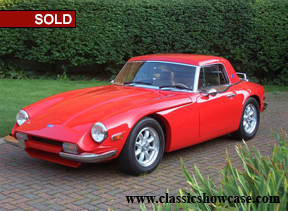 (SOLD) AVO adjustable shocks were installed with custom springs lowering the car about 2". Ground clearance is still very good since the wheel size was increased to 15" over the original 14" design. Grade 8 bolts replaced all the original hardware making this chassis safe and structurally sound. The car originally came with rubber bumpers, but these were replaced with new chrome bumpers all around at a cost of $3,600. The vinyl interior was updated to all Connolly leather, and an AM/FM, 6 CD changer was added. The motor was totally rebuilt using parts from Burton Motors in England. A fast road cam was added, new pistons, and total seal rings. The original two-barrel carb was removed, and triple DCNF Webers and custom intake was added. This feature alone was $5,000! For reliability, a Petronix breakerless ignition was added along with an MSD. This car has a 50/50 front to rear weight bias. The handling is fantastic and the acceleration and speed are unbelievable. An estimated 246 HP is being provided by the motor. Custom header and ANSA exhaust give this car a rich, deep rumble. A custom aluminum radiator shroud and electric cooling fan prevent this car from ever overheating. You can sit in 90º F traffic and the water temperature never exceeds 70º C. There is both an original canvas soft top that is in perfect condition along with a perfect additional canvas top. The rarest part of the car is the removable hardtop. Only 10 of these hardtops were made. The hardtop is easily removed with the custom-made hardware. It seals extremely well for a convertible designed car. The side curtains, which are chrome, have perfect sliding windows, very cool, and a storage bag for when the top is down. A luggage rack has been added for your picnic basket or cooler of wine.

The TVR 3000S is an open, hand-built sports car designed and produced by TVR in Blackpool, England in 1978 and 1979. Only 67 in left hand drive, with a total of 258 made. Of the 258 made 49 were exported to North America, and probably only 15-20 made it to the U.S. For the 3000S, TVR used the same backbone frame setup as the other M-series cars. It was significantly longer and more rigid than the chassis used by earlier cars such as the Vixen. The suspension was independent at all four corners with unequal-length wishbones. It’s a very rare car! This car underwent a body off restoration. The chassis was painted black, while all original bushings were removed and new rubber bushings were installed.