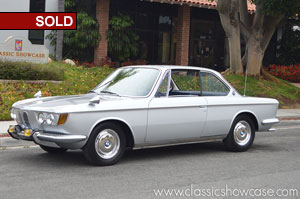 UPDATE: 7/15/21 - PENDING SALE This Silver 1967 BMW 2000 CS was developed as a “Coupe Sport” variant of the 2000 coupe model, and is a very rare, and quite handsome example that has been fully restored and regularly maintained. It's not every day that you see a survivor such as this be available for purchase, but we’ve found one, and are pleased to offer it to collectors and serious enthusiasts of classic Bavarian Motor Works cars worldwide. This 4-headlight example has a colorful history of single long-term ownership, where the car was the subject of a 3-year restoration and has been meticulously maintained. The car has also taken part in numerous Northern California Concours events, including The Palo Alto Concous d'Elegance and Concorso Italiano in Carmel Valley.

Th 2000 CS features a body designed by noted German designer Karmann, and is powered by a fully detailed 2000cc 4-cylinder engine with twin Weber carburetors along with a 245 Gertag 5-speed manual transmission for improved performance. The BMW’s exterior has a striking look all the way around, from the dual chrome bullet mirrors to the complimenting chrome bumpers, and rests upon a fresh set of new 195 x 70 R 14 Vredestein tires.

The Sport Coupe's spacious interior is highly original throughout and features full instrumentation - which includes a unique Tachometer that is located just above the steering wheel, surrounded by a beautiful wood-trim that runs throughout the entire interior including the dash, steering wheel (and horn button), and the doors of the car, producing a refined and stately look. The car retains its original glass all around, has great visibility from all windows, and the headliner inside the 2000 CS presents wonderfully. The 2000 CS also features power windows, a Pioneer AM/FM/Cassette stereo system, and also includes a photo/history book, and numerous service records of previous work performed, including a recent hot tanking and epoxy sealing of its gas tank.

Classic Showcase has just completed restoring and reupholstering the front and back seat, as well as reupholstering the package tray at the rear window, installed new Coca mats in the front, serviced all 4 electric windows, performed a full vehicle servicing inside and out, and added period correct yellow Fog Lights to the front bumper. The BMW is now ready for your great motoring experience! These higher performance iterations of the 2000 model have shown to be scarce, so don't miss this opportunity to experience a unique BMW model that is ready to take on your favorite roads and highways. 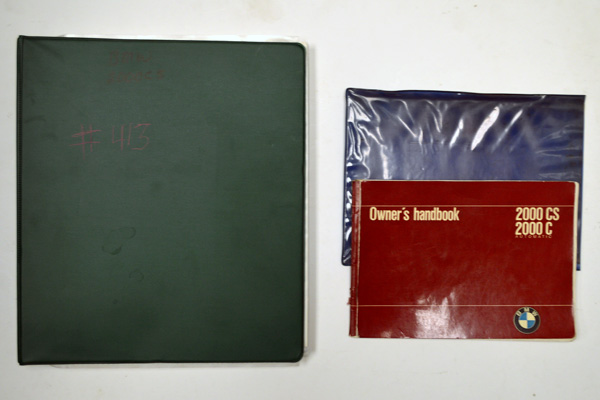 The BMW New Class (German: Neue Klasse) was a line of sedans and coupes produced by German automaker BMW between 1962 and 1977. These models ensured BMW's solvency after the company's financial crisis of the 1950s and established the identity of BMW automobiles as sports sedans. The first New Class vehicle was the 1500, a 4-door compact executive car with the new M10 (at the time called M115) OHC 4-cylinder engine. In 1965, the 2000C and 2000CS luxury coupés were added to the range. Replacement of the New Class models began with the larger 2000C and 2000CS coupés, which were replaced by the 6-cylinder E9 2800CS in 1969. In 1972, the 4-door sedans were replaced by the larger E12 5 Series. The New Class coupes introduced the Hofmeister kink, which has been used on most BMW cars since. Another legacy of the New Class is the iconic 02 Series, which are a shortened version of the New Class sedans.

Intended as an upscale version of the 1800, the 2000 featured distinct wide taillights, more exterior trim, and unique rectangular headlights. The American market 2000 sedans could not have the rectangular headlights due to government regulations. A different grille with two individual round headlights, similar to the design that BMW later used in the 2500 sedan, was offered in the US. The 2000TI retained the '1800' taillights and headlights.[citation needed] A more luxurious 2000TI-lux (later "tilux") featured the sporty TI engine with a more high-grade interior and accessories,[1](p143) including a wood dashboard and optional leather seats.

In a 1967 test, Road & Track felt that the 2000 sedan was "the best performing 2-liter sedan in today's market and the best handling and best riding as well."