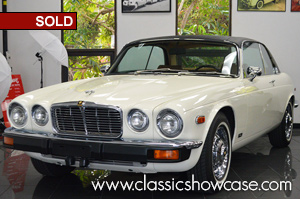 (SOLD) This 1977 XJ6C Sports Coupe is a very original car and a solid example that has been very well maintained and regularly serviced. This particular example features the rare Pillar-less Window post design, and while sporty, the car has more than enough room to accommodate up to 5 adults comfortably. The Sports Coupe is in an attractive color combination of Old English White over a Biscuit interior with a vinyl roof that is unique to this model, as it came from the factory. The Coupe comes with a Jaguar AM-FM-8 track cassette stereo, full instrumentation, and a number of luxury/comfort options including power steering, power windows, power brakes, and factory air-conditioning. The Coupe features a spacious trunk that is perfect for storage, and a streamlined body to accommodate it's rare and unique 2-door Pillar-less window post design. We have scheduled a full service and detail to the XJ6C to be ready just in time for the summer driving s Classic Showcase and the car includes the original Owner's Manual, Jack, and spare tire. The XJ series models - particularly the Pillar-less Window post varieties - have seen a big resurgence in popularity with collectors and enthusiasts alike, so don't miss your chance to acquire a solid example of a classic Jaguar design!

We recently have performed the following to the XJ6C:

• Wet sanded and buffed the exterior
• Rebuilt the steering rack.
• High pressure cleaned, detailed, and painted the undercarriage.
• Cleaned, prepped, painted, and polished the jams, rockers, door edges, the bonnet edges, under the front valence, the rear section under the rear bumper, and the side panels where the gas tanks are.
• Re-chromed the front and rear bumper and some misc. chrome to the car.
• Replaced the front grill badge emblem.
• Replaced the tail light lenses.
• Detailed the engine.
• Installed all new belts.
• Fixed the fuel sending units.
• Serviced the air conditioning and replaced components so the system blows cold.
• Sorted out all the electrical.
• Shampooed the carpets.
• Tidied up the upholstery.
• Oil change.
• Oil filter and lube.
• Plus the other things we do automatically because we are passionate about making cars nice!