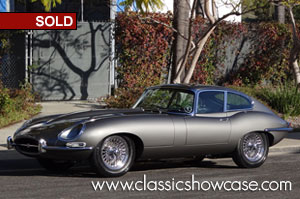 June 2022 Update: there is a pending sale on this vehicle...This Jaguar E-Type Coupe has just finished its restoration and is now ready for a new home! This XKE is a great example and was a prime candidate for restoration as it benefited from long term ownership and includes many coveted Series 1 features including: covered headlights, toggle switches, and triple SU carbs. In addition, the Coupe also features: a fully synchronized 4-speed transmission for smooth shifting, the more comfortable 4.2 style of seats, armrests on the doors, and a beautiful and desirable color combination of Gunmetal Grey with a Dark Blue interior.

Included in the restoration process:

Bodywork: the vehicle was stripped to bare metal, was placed on a rotisserie, metal finished, leaded, all body parts fitted to the car and chrome, were prepared for primer, sealer, paint, base, clear, wet sanded and buffed to a fabulous Gunmetal Grey finish you see today. All chrome was re-plated where needed, and the car presents beautifully.

Mechanical: all systems on the E-Type were gone through, and the engine and fully synchronized transmission were rebuilt back to factory specifications by our dedicated team of craftsmen. In addition, the XKEs other major systems were restored and brought back to factory specifications, including the fuel, electrical, cooling, and hydraulic systems. The E-Type has also received a new wire loom, epoxy-sealed gas tank, a new fitted exhaust system, and its instruments were painstakingly cleaned and serviced.

Interior: The E-Type has received a completely new custom-tailored and fit Dark Blue interior in all of the correct materials by master trimmers in our upholstery department, nicely complimenting the beautiful Opalescent Gray exterior. This XKE also features the more comfortable 4.2 style of seats, which were restored by master trimmers, as well as armrests on the driver and passenger side doors, creating a special look that only a Series 1 E-Type can deliver.

This E-Type is now ready for the Jaguar collector that is seeking an example that can not only be enjoyed on your favorite roads and highways, but as a fierce competitor on the Concours/Show circuit. Regardless of use, this 1965 Series 1 E-Type is full of the beauty and excitement these models are known for, now fully restored to perfection. An mp4 video file of the restoration process will accompany the vehicle. 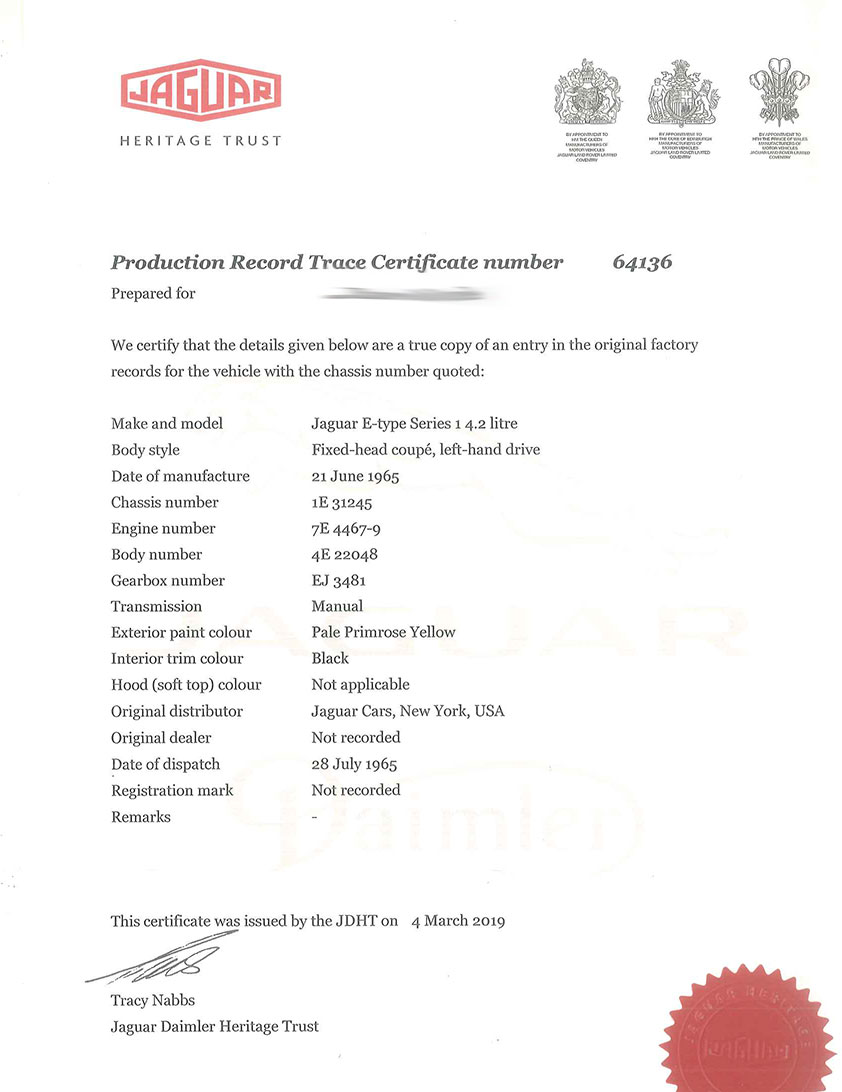