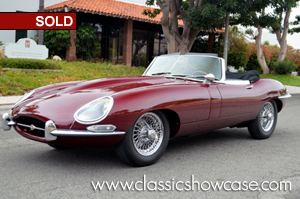 (SOLD) This striking numbers-matching 1967 Jaguar Series 1 E-Type roadster is a 2-owner from new car that has been restored to a high-end driver level by its previous owner. The XKE had been kept in an estate’s garage since 1971 and is reported to have a little over 20,000 miles traveled since new. During the restoration, the car was stripped to bare metal, then wet sanded and buffed to the beautiful Opalescent Maroon finish you see today. In addition, the XKE’s engine, rear end, and other mechanical systems were rebuilt as well, and the car runs and drives wonderfully today. While the car looks and drives very well as-is, we would recommend restoring the seats, and re-plating the chrome if its next owner desired to take it to a higher level. The E-Type has been shown in recent years at the Muckenthaler Concours in Southern California, where it was the recipient of a Best Jaguar in Class award. The E-Type also includes a rare and very desirable factory hard top in good condition to complete an already incredible look. The car also includes: a tool set, jack, top boot, front license plate assembly, as well as books and a Jaguar Daimler Heritage Trust Certificate to verify its authenticity.

The Series 1 4.2 is a very user friendly, sporty driver, and one of the most collectable of the E-Types. These are wonderful cars with a 4.2 liter engine with 3 SU carburetors and a fully synchronized transmission. Some of the features of this model are toggle switches, full instrumentation with styling and a design that was way ahead of its time with center console, and arm rests. Other features of this Series 1 are its steep windshield and tail lights, which are placed above the bumper line in the rear deck. Similarly, the parking lights are above the front bumper line in the front fenders. In 1964 when the 4.2 was tested, fuel consumption was rated road reported at 22 MPG and a top speed of 140 MPH. 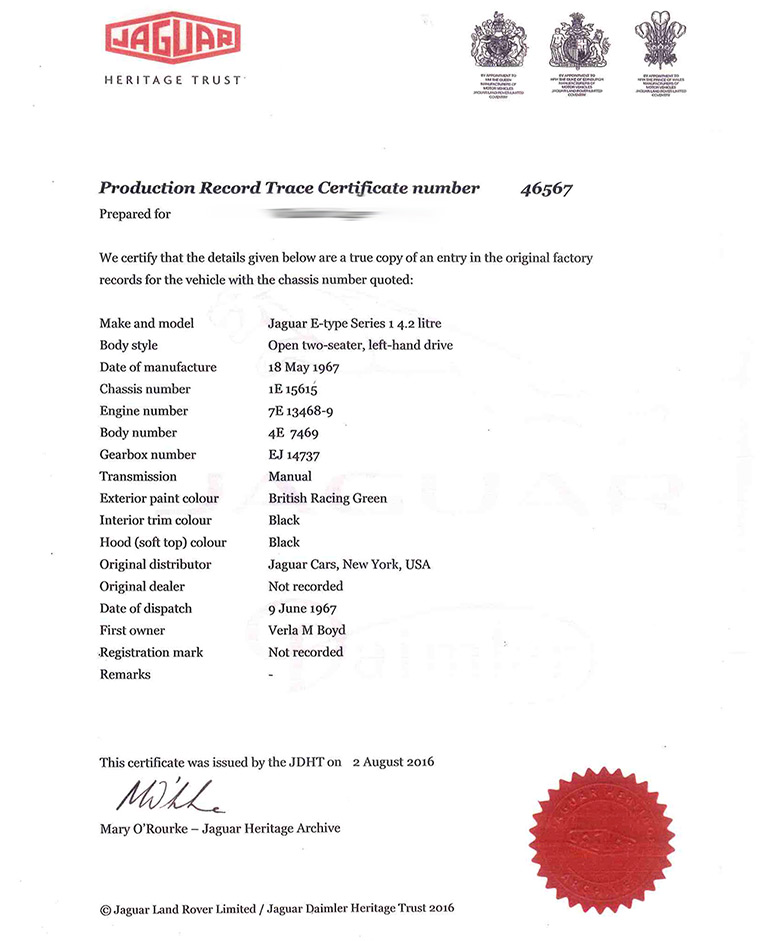