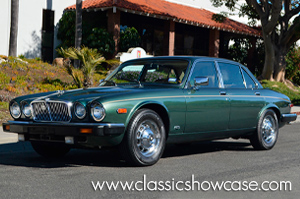 Classic Showcase is pleased to offer this handsome 1987 Jaguar XJ6 Sedan to collectors and enthusiasts alike. It is a rust-free example that has spent its life in California and Texas, and has always been properly maintained and cared for by its current long-term owner. The Jaguar features a beautiful wood-trimmed dash and a number of desirable options, including a recently serviced and updated air conditioning system, a stylish Nardi 3-spoke steering wheel, electric sunroof, dual door mirrors, along with power steering and brakes to give you one of the smoothest drives you'll ever experience in a Jaguar!

Our team has just recently performed a major service to the XJ6, as well as performing a number of mechanical and aesthetic improvements including:

With the recent service work performed, the XJ6 is now ready for the road! This 1987 XJ6 sedan would make a great choice for the seasoned Jaguar collector or enthusiast that is looking for a classic and very original XJ6 example that is worthy of your favorite drive or that can be shown at your favorite local Concours events. The 70s-80s era XJ6 models have a seen a rise in popularity as of late, so don't miss this chance to own and enjoy one of Jaguar's finest luxury sedans with this great looking and driving example!