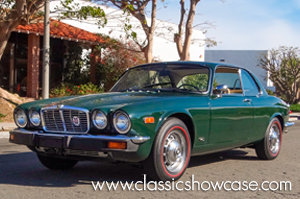 Classic Showcase is pleased to offer this matching-numbers 1975 Jaguar XJ6C to collectors and enthusiasts worldwide. The Coupe drives as nicely as it looks, and features the limited pillar-less window design, and is finished in a desirable and factory-correct British Racing Green and Biscuit leather color combination. It is an original Northern California XJ6C, has been well maintained, retains its original California Blue Plates, and rests upon original Chrome Wheels and hubcaps creating a great look.

Fall 2022 Update: Our team has recently performed a number of services to the XJ6C, including:

• Comprehensive servicing of the engine, transmission, and brake system.
• Removal and refreshing of the Seats to improve the interior.
• Restored the sunroof mechanism which included lubrication for proper operation
• Performed a major detail inside and out
• Sorting of the XJ6C's electrical system
• Installed a new compressor and A/C lines, as well as evacuating the system and recharging the refrigerant.

The Jaguar is powered by 6-cylinder engine and a 3-speed automatic transmission on the console and has a number of desirable features including: A/C, Full Instrumentation, Electric Door Locks, A Wood-trimmed Dash & Interior, Electric Sunroof, Bucket Seats, and a large Trunk for storage. These original XJ6 models have seen a surge in popularity as of late, so don't miss this opportunity to add an original BRG & Biscuit XJ6C to your collection.