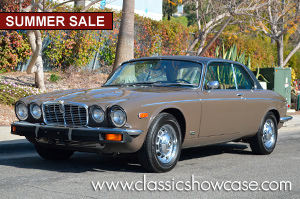 The Jaguar XJ12C is a limited production run, rare two-door pillar-less coupe version of Jaguar's standard XJ four door saloons. This example was manufactured in 1976 and is one of the only 1,855 V12 5.3 Coupes Jaguar ever produced. It features a 5.3-liter V12, 12 cylinder with twin alloy overhead cam and a 3-speed automatic transmission. The body is in Sable, and nicely complimented with a black vinyl top. The plush interior presents wonderfully, and comes in Biscuit, with matching leather seats. The car features all power options, as well as a dual-exhaust system, and has recently received a full servicing by Jaguar professionals.