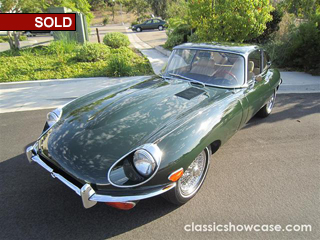 (SOLD) This superb example was originally ordered and purchased directly from a German Jaguar dealership in 1970 and it was shipped to New York within the same year. It later found its home in Palos Verdes, CA. It has had only had one owner since it was produced and it has recently undergone a comprehensive restoration to Show/Driver level by Jaguar professionals. It has had a complete repaint in base coat, clear coat, wet sanded, and buffed to a high level. All systems have been gone through and the engine, transmission, rear end and suspension have been rebuilt. A new stainless steel exhaust system has been installed and all of the britework was re-plated. This XKE features an AM/FM Blaupunkt radio converted to digital with an IPod jack and a showcase’s beautiful color combination. In its first show since restoration, it took first place. It is complete with jack, manual, CA blue plates, small California pink slip, and has documented records and receipts dating back to 1970. This XKE would be an excellent addition to any Jaguar enthusiast’s collection, as well as a spectacular car to drive.

The E-Type was initially designed and shown to the public as a grand tourer in two-seater coupé form (FHC or Fixed Head Coupé) and as convertible (OTS or Open Two Seater). The 2+2 version with a lengthened wheelbase was released several years later. On its release Enzo Ferrari called it "The most beautiful car ever made".