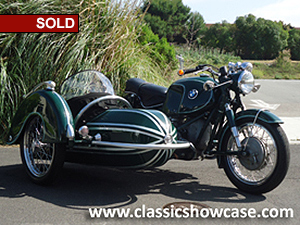 (SOLD) This BMW motorcycle had a two year comprehensive restoration. The offered sidecar is a rare Steib S350 Sport chair with a boat tail. The vendor is well known in BMW circles as a connoisseur of rare accessories and obtained complete collections to obtain a single item. The Earles Fork R60 benefited from this obsession. Features include a 9.5 gallon Heinrich aftermarket tank with cutaways for the sidecar mounts. The color is one of three police greens available in that period; complete with mint stripes palladium accents. There is an aftermarket tachometer and what collectors refer to a VDO “Gold” clock. The latter are occasional $3000 vintage mechanical items. Headlight mirrors are all original Alberts. Bar end turn signals include the proper Hella lenses. There is an aftermarket Hella driving lamp to augment the headlight. It has an unusual mirror on the back that was likely meant to be used as a rear view mirror. The sidecar is stunning with its bullet nose and wrap around trim pieces emanating from the nose leading to a boat tail back. The rounded body is accented by the Cobra fender and handle. A period rally light is on the outboard side of the chair. It shines with a captivating lilac lens, providing more visibility to on comers than the fender running light. The ensemble is completed by two pieces of vintage luggage complete with period destination decals. The odometer shows just over what is reputed to be an original reading of 17,279. This classic R60/2 outfit was restored in 1999 and has only been ridden 600 miles since. It represents the best of an era when BMW were the choice of police, the military and discerning riders all over the world who needed the absolute reliability in extreme conditions. The vintage upgrades add even more to its desirability.

In 1961, BMW upgraded the engine of their 600 cc R60 boxer twin and added a /2 to the designation. The /2 series with its Earles Fork has become one of the most collectable post-World War II BMWs. Production continued through 1969, although telescopic fork bikes were produced concurrently near the end of the production run.