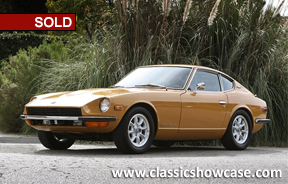 (SOLD) This beautiful, unmolested vehicle is in excellent, original condition and would be a great addition to any Datsun enthusiast collection. It was well maintained, garage kept and is a solid, California car with only 2 owners. The paint and interior is all original and in very good condition. The brakes and suspension have been gone through and included new shocks, springs, sway bars and strut tower braces. The car received a major tune up and service, the carburetors were rebuilt and the cooling system has been serviced. The engine is in excellent condition and would serve well as a daily driver.

The Datsun 240Z was introduced in 1969 as a 1970 model. The engine was a derivation of the Datsun 1600. The Datsun 1600 was a copy of the 1960’s six-cylinder Mercedes-Benz 220 engine, but with two less cylinders. By adding two extra cylinders in the 240Z the cylinder count was back to six. With 151 horsepower and 146 pound-feet of torque the vehicle could propel from zero-to-sixty in eight seconds. The independent suspension and the rack-and-pinion steering added to its quick response, performance, and handling. The front disc brakes brought the car to a stop from high speeds in just seconds. Due to the performance and low price of this vehicle during it’s time, there was a seven month waiting list to acquire one of these incredible cars.