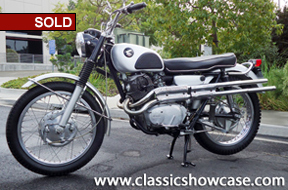 (SOLD) Scramblers were quite different from traditional sport bikes because they were capable of off-road racing. In order to increase ground clearance, it had upswept exhaust pipes running down the bike’s left side This bike has a small sized fuel painted fuel tank and included fork boots, 19-inch front and rear wheels, coarser-tread tires (called universals), abbreviated fenders and a taller handlebar with a cross-brace. The earlier models had painted aluminum fenders.

The 305 cc overhead cam engine redlines at 9000 rpm which was contrary to its low-revving European and American counterparts. The CL77s featured a loud and very distinct sound due to its straight running pipes, small internal baffles and a 180 degree firing order of this parallel twin. To provide extra strength, the design of the bike included a bigger tube frame with a front downtube which ran through the area where the electric starter is located in both the CB and CA models. Getting rid of the starter gave the bike even more clearance and lightened the total weight of the bike as well. In the later years, Honda joined together the end of the exhaust pipes into an external factory installed muffler in order to help muffle the noise level of the exhaust. At first it was a slip-on device which was slipped on and clamped. Popularly called a slip-on muffler or just "slip on". Later models came with only one of the twin side pipes welded onto the slip on muffler. The last version came with both pipes welded to the slip-on muffler. Apparently Honda was pressured to make the slip-on muffler permanently attached do to the loud level of exhaust noise made without it. Its overall sound however was one of the features that sold a lot of these popular motorcycles