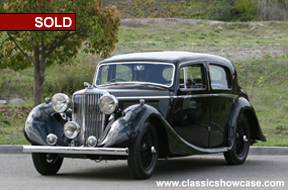 (SOLD) This is a rare 1-1/2 liter saloon that reportedly was featured in the Roger Moore movie "The Man Who Wouldn't Die". It has low actual miles that are documented on the title. The previous owner had the car for over 11 years during which time the car had an excellent body off restoration. This 1.5 Liter is reportedly much more rare and therefore in greater demand than the 2.5 Liter model. Recent full service and detail by Classic Showcase.

In 1926, under the ownership of William Lyons and William Walmsley, the Swallow Sidecar and Coach Building Co. began production of the small Austin Seven, a "people's car" of rather Spartan design. It was in this facility that they made custom bodies for such cars as Morris, Fiat, Wolsley, Swift, and Standard. Shortly thereafter, the company introduced to the public at a London exhibition, their first car, the SS1 in 1931. It was based on a Standard six-cylinder engine and a modified Standard chassis. The SS coupe hit the British motoring public with the same kind of drama that the new XKE would evoke some thirty years later. Using mechanicals purchased from Standard Motor Company, the styling of the SS was nothing short of sensational. Its expensive looks belied it excellent monetary value. The company name changed to SS Cars Ltd. in 1933. In 1935, Lyons introduced the streamlined SS-1 Airline Saloon and the SS-90. He bought his partner out in 1936.